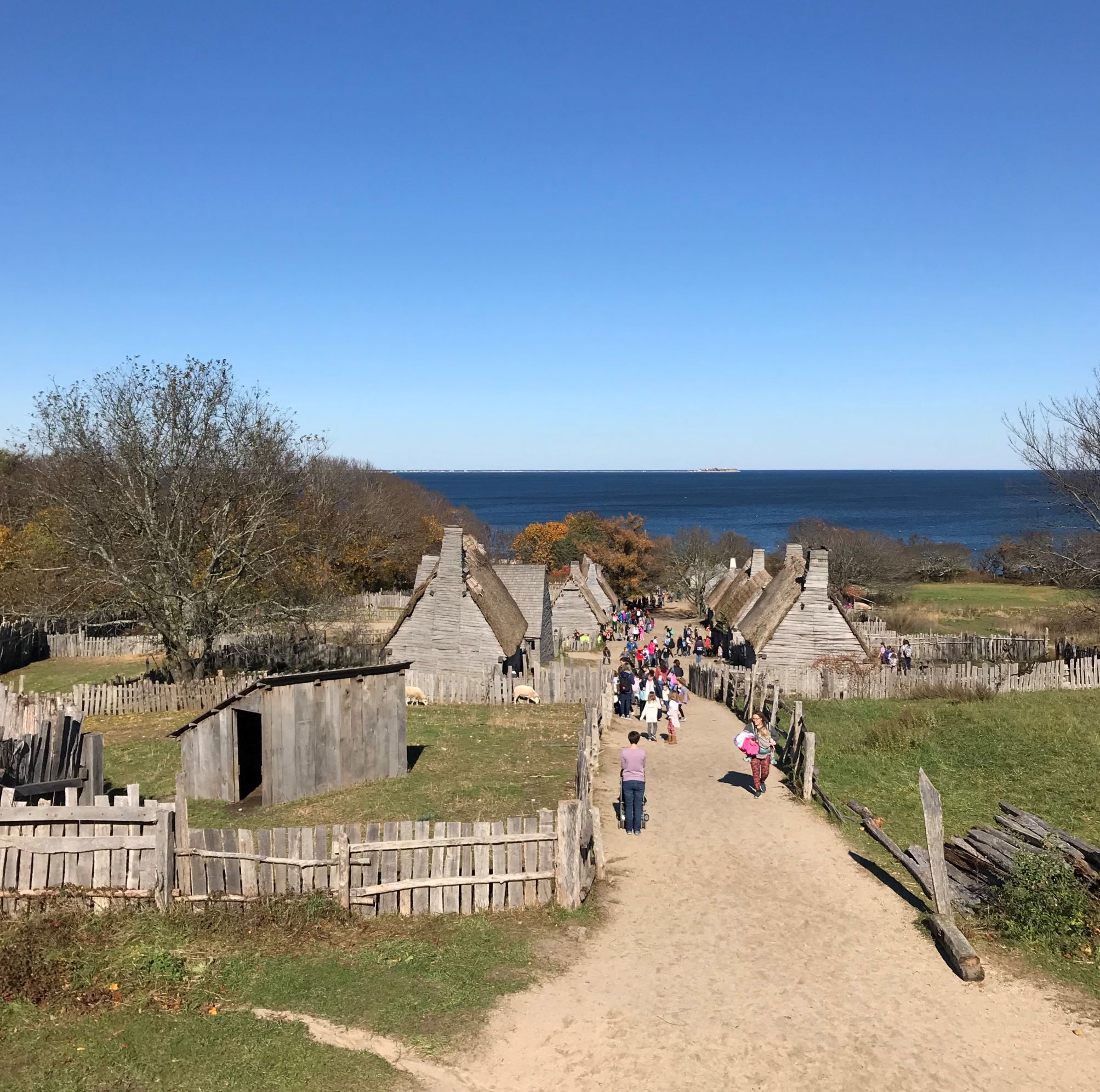 Early November weather in New England can fluctuate wildly. Wind-driven rain is as common as Indian Summer. A couple of weeks ago, just in time for Thanksgiving, I decided it was time to visit Plymouth, Massachusetts. However, my enthusiasm waned, considerably dampened by the rainy forecast early in the week. But Wednesday looked to be ideal: Sunny and high 60s. With our open schedule, we could just pick the best day and go!

Plimouth Plantation may be one the best living history museums I've ever been to. (Evidently, colonial spelling fluctuated as wildly as the weather!) They set up the houses exactly as they would have been and hired actors to play the people who would have lived in that house! It was so much fun to interact with them, although I found it awkward to take pictures inside since it would force me to "break character".  Haha!

Before the trip, my student and I had carefully considered what questions might be interesting to ask the "Pilgrims". Of course, when the time came to ask questions, we realized we had left them in the car. D!oh.

One that we remembered was, "What jobs do ten-year-olds do?" And my student asked that of the woman in the first house. The answer: "A young one such as yourself might pound the corn and grind it with yonder pestle. That might be a whole day's work. They'd be expected to tend the garden and help in the scullery." After I consulted a dictionary, I discovered the scullery was a room for washing dishes and clothes. And while we have machines to help, it still true that children are expected to help with those chores today.

My student couldn't imagine pounding corn all day long, though. But seeing him enjoy this big stick, he'd be good at it. My student never met a stick he didn't like. 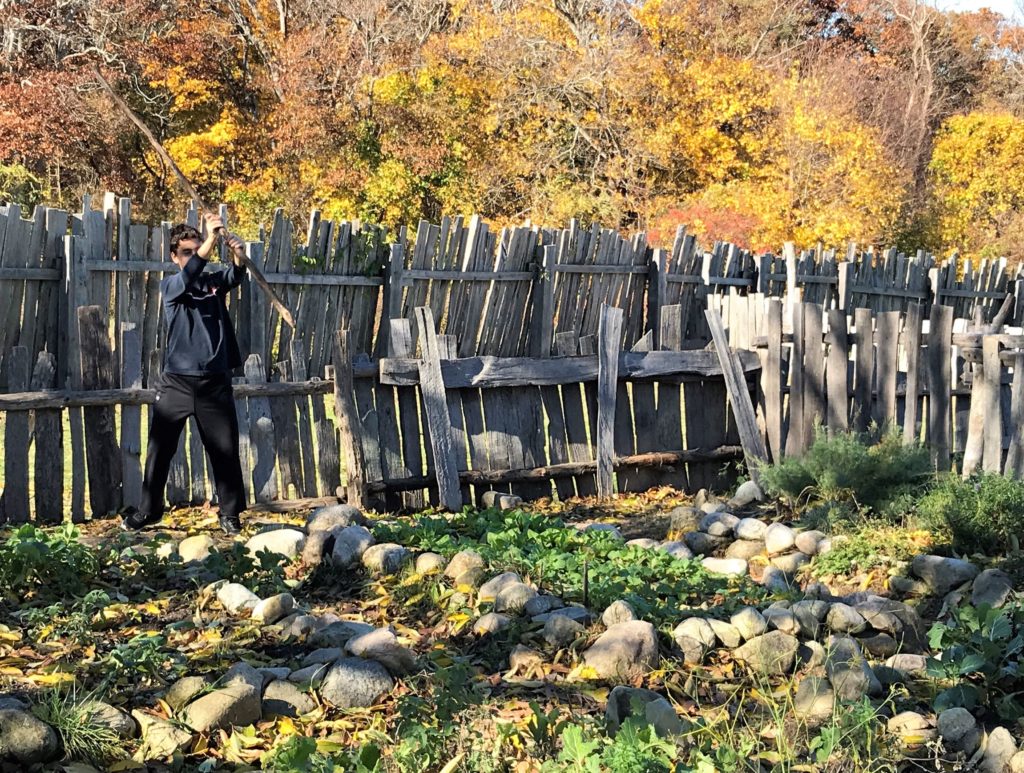 The gardens were beautiful and almost perfect. They even included this very authentic seventeenth-century artifact—the yogurt snack. 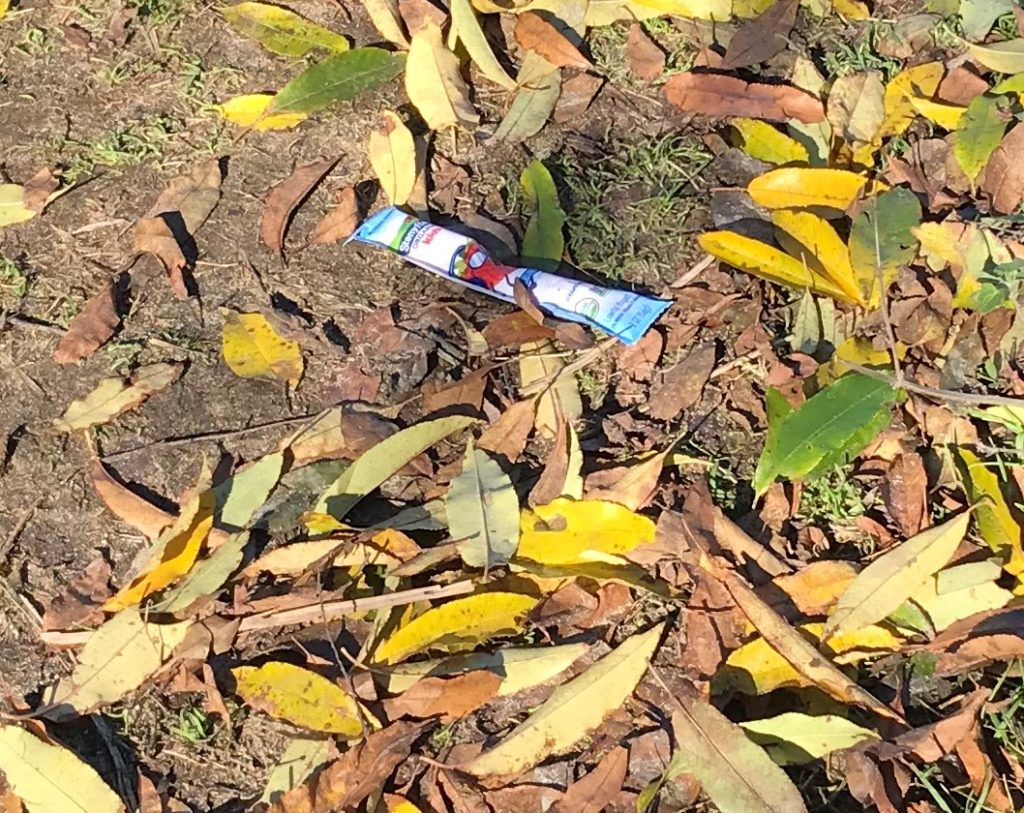 We lunched on a large field next to the grounds. 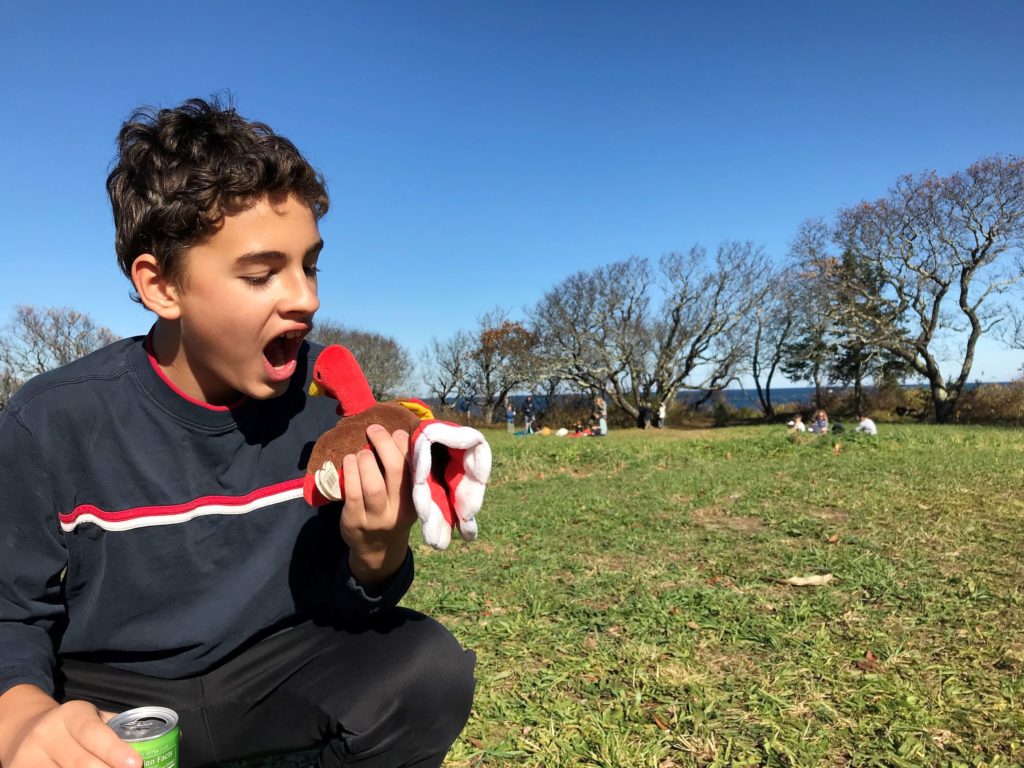 When we finished lunch, my student took off running. It seemed like a good idea until his foot found a hole just large enough to cause him to take a tumble right into what he called a "cactus". It was probably not a cactus. It was more likely a prickle bush with the kind of prickles that dive right into your clothes and stab your skin relentlessly. And make you complain relentlessly. And make you wish you could go home and change. Let's just say they were a real pain in the rear. I reasoned with my student that home was more than an hour away and convinced him to try to see if he could get them out himself. 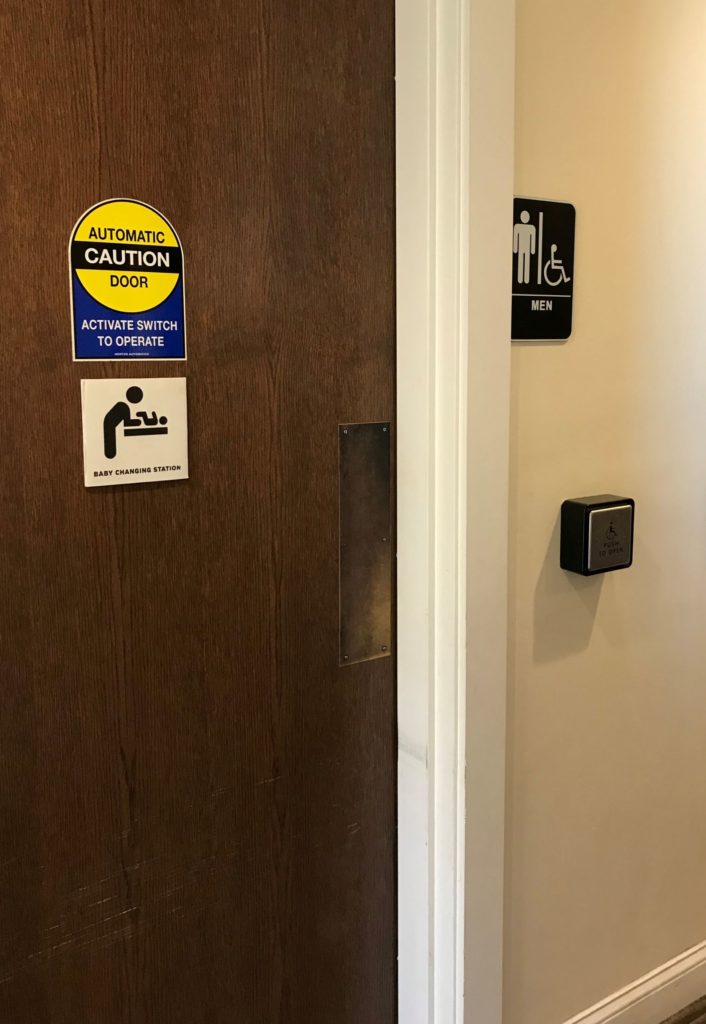 And that is how I came to spend the next twenty minutes outside the men's room of one of Plimouth's finest twenty-first-century buildings.

The few he couldn't get, he allowed me to try to remove. And through the miracle of fingernails, we were back in action.

Back in the seventeenth century, we saw sheep and chickens. 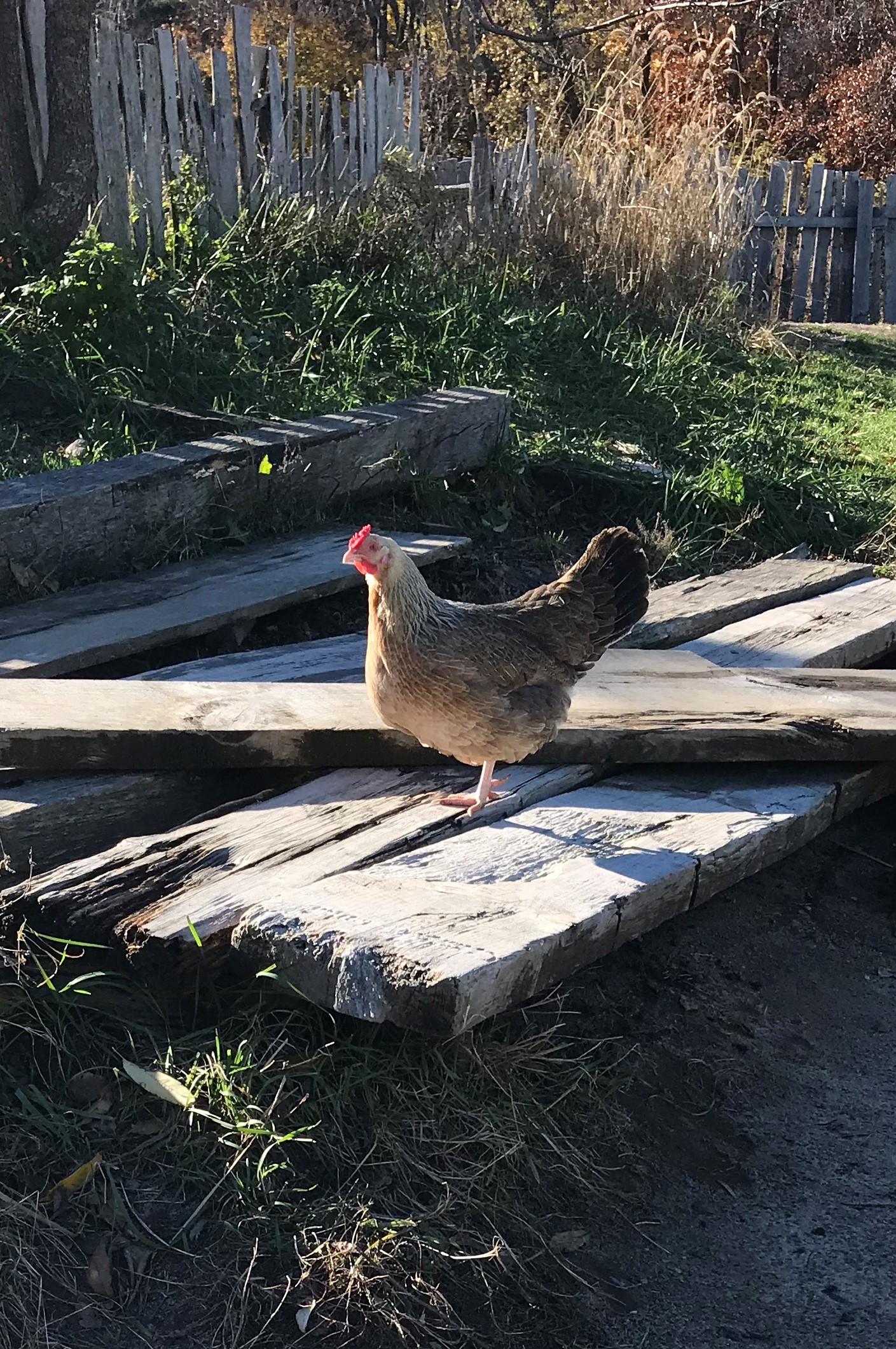 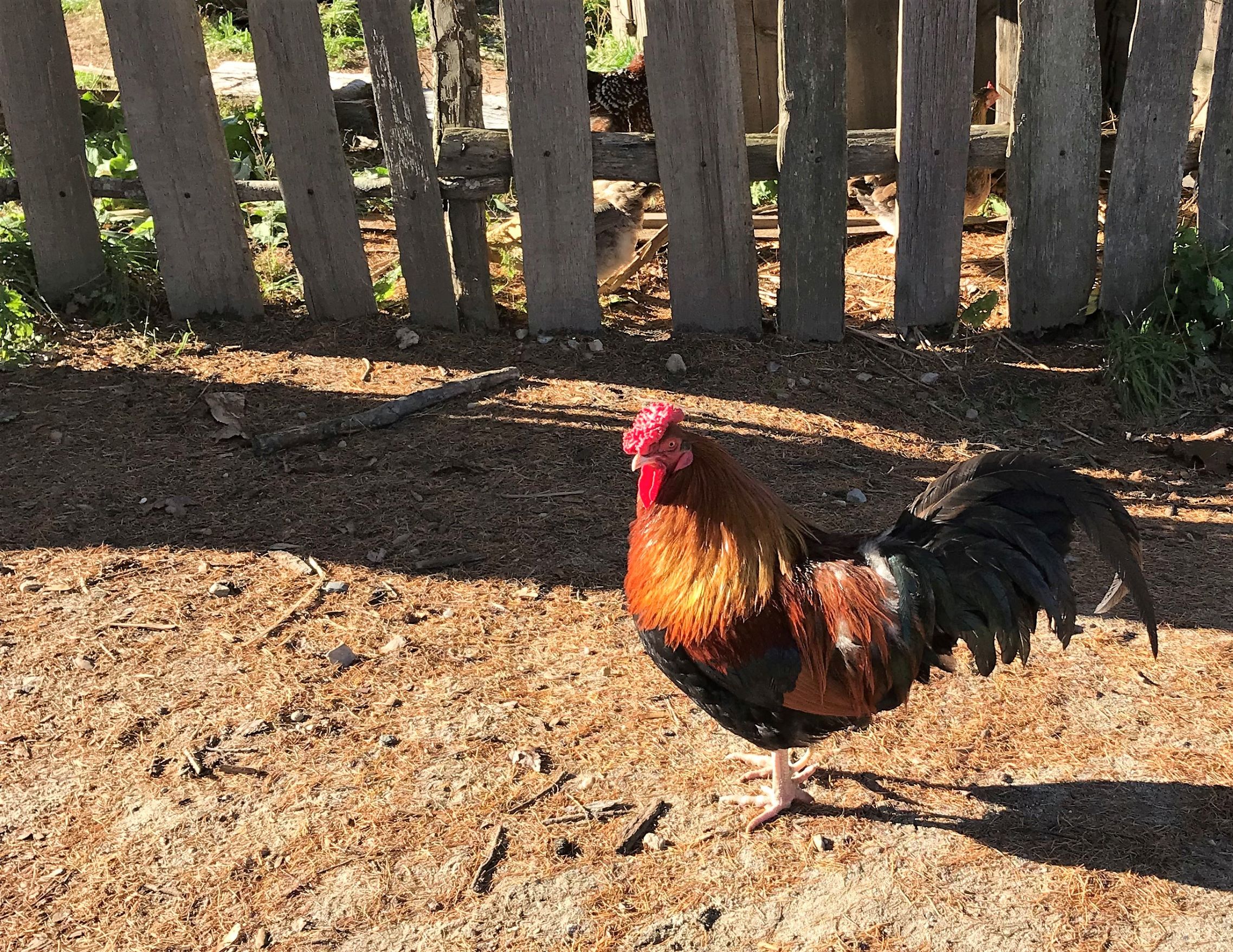 The most shocking thing I heard was not that Sunday services were six hours long. It was that the kids didn't have to attend! They stayed home and took care of themselves and their younger siblings. I guess Sunday School hadn't been invented yet.

My student particularly enjoyed the Fuller house.  Not only did it sound fun to say, like the TV series, but it had an abundance of sticks. 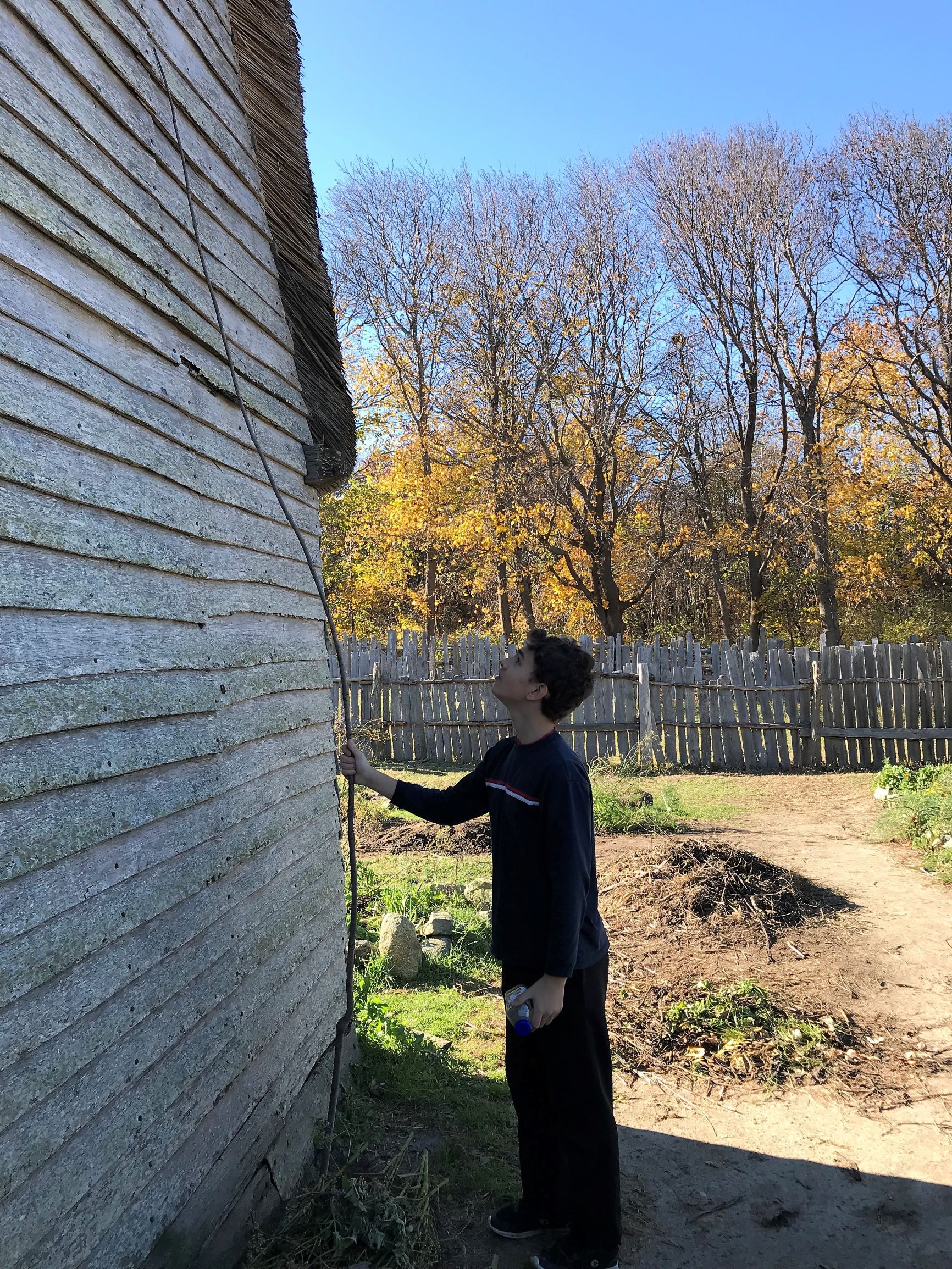 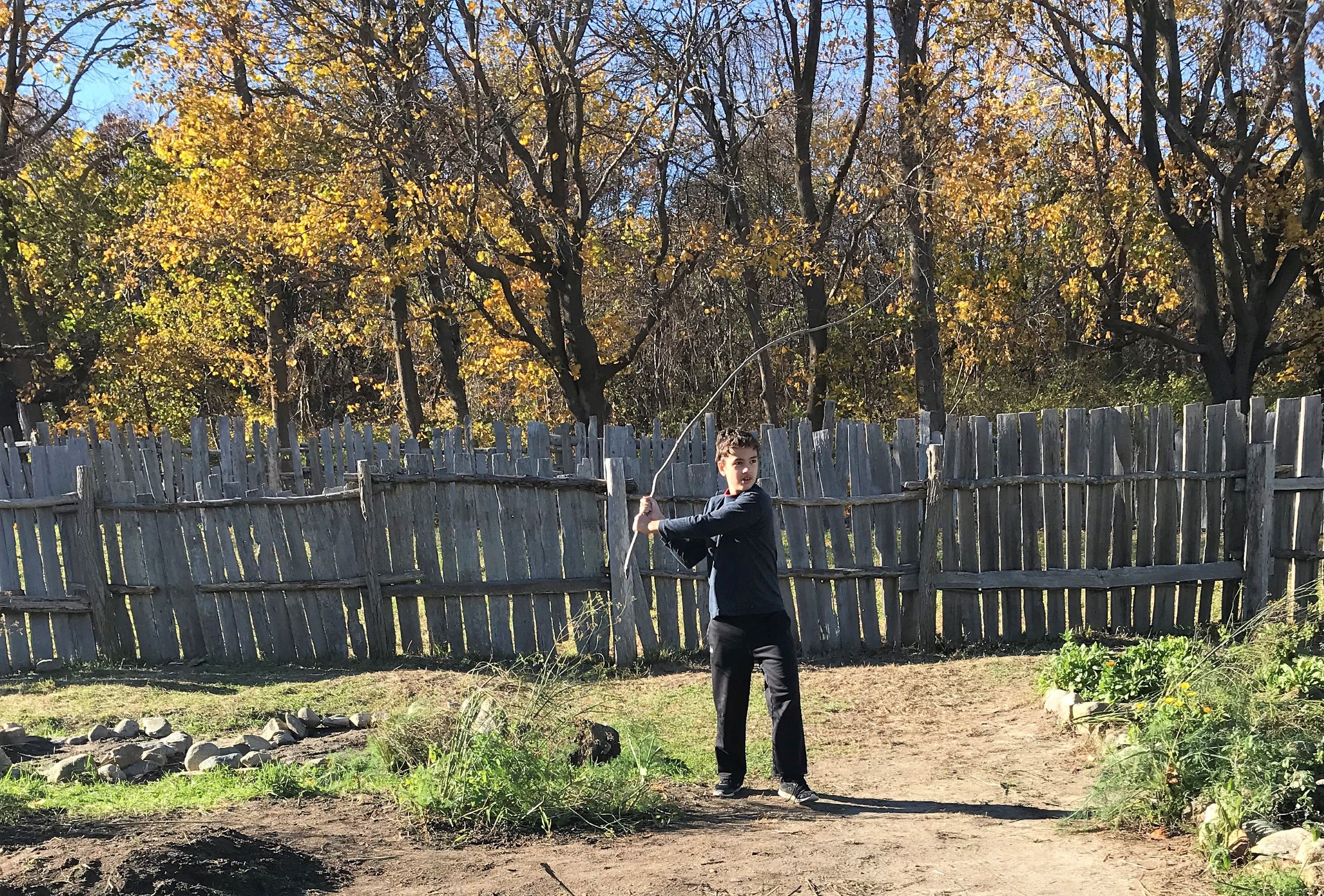 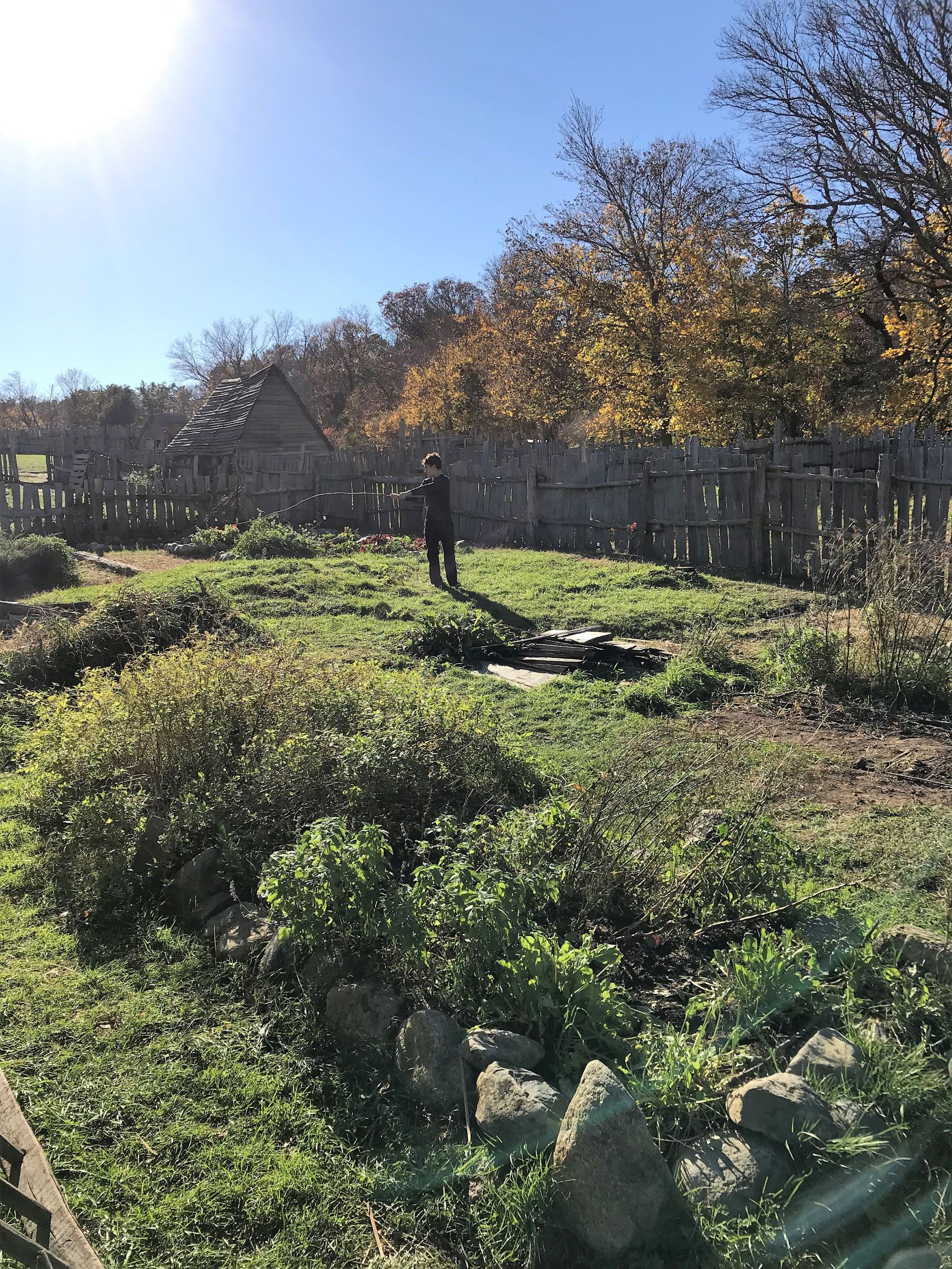 My student interacted with Mrs. Fuller to find out what she did with all of them. "I have just taken down my bean poles," was the reply.

There was a very well-organized school group from Falmouth which had assigned 4-5 students to each chaperone. These small groups filtered in and out of the exhibits. It was very easy to accompany them into a pilgrim house or longhouse. 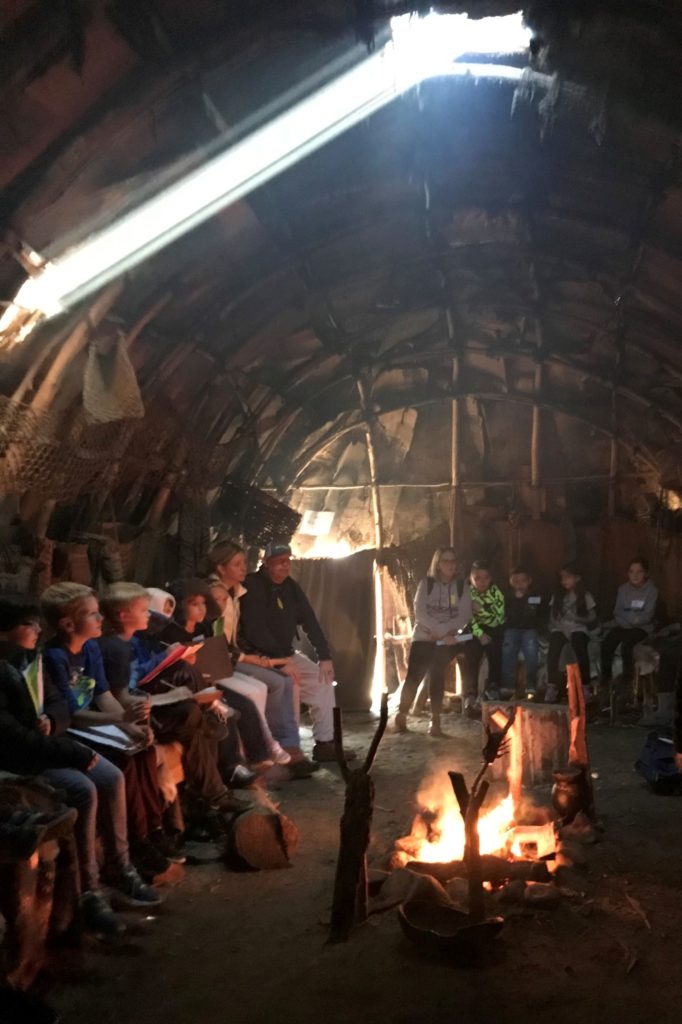 Listening to how the Wampanoag tribe lived left our clothes with a deliciously smoky smell. Sometimes school groups are so large it is hard for us homeschool families to fit in, but this was nice. I'm not sure if it was the school's decision or the Plantation's suggestion, but it worked.

In the gift shop, we had to pay for a souvenir penny, unlike The Saugus Iron Works. 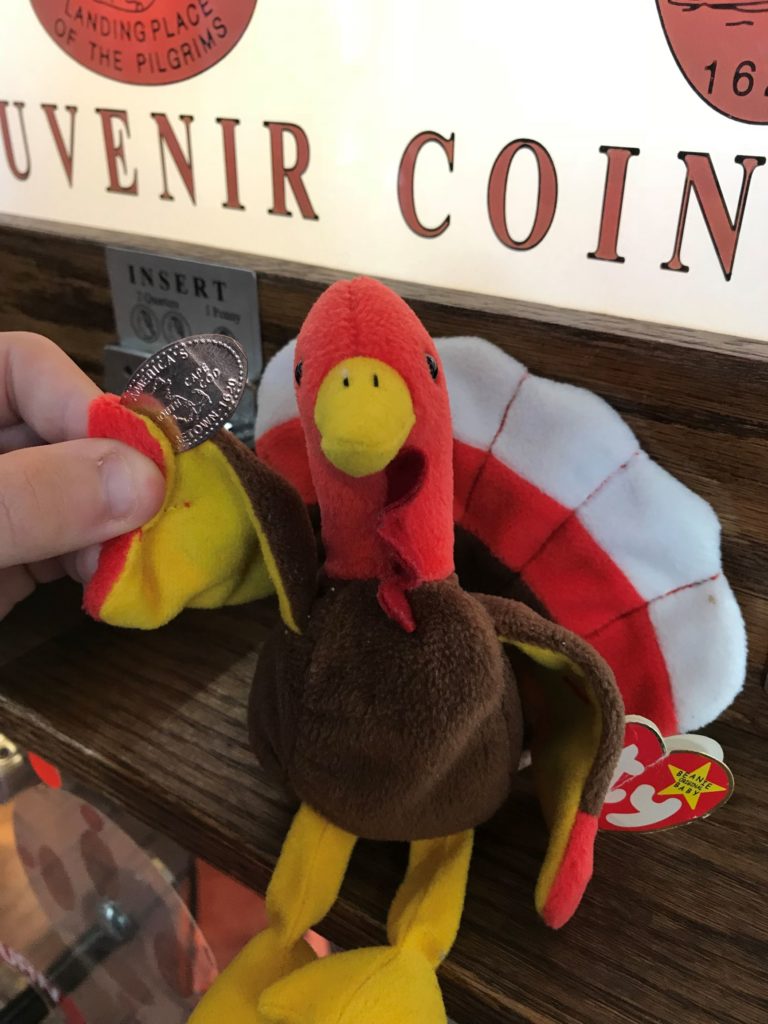 After Plimouth Plantation, we went to Plymouth Beach, a personal pilgrimage site of sorts. I told my student the story about how, back in April of 2007, sensing God was going to be making some changes, our family chose this beach to recommit ourselves to His service. We had no idea what that might mean. International travel? Would Dad be getting a new job?

Two days later I discovered I was pregnant! My student knew the story of his improbable beginning, how some earlier pregnancies were hard to come by and fraught with peril, and how thrilled we were with his arrival. He had heard these stories before, but I wanted to show him photographic evidence of the past and take him to the place where it all began.

The kids in this photo are now in college.  And my student is now the same age as the older one was here.

As we walked up and down the beach, I relished the memories while my student relished throwing rocks in the surf. I guess Plymouth really does rock. 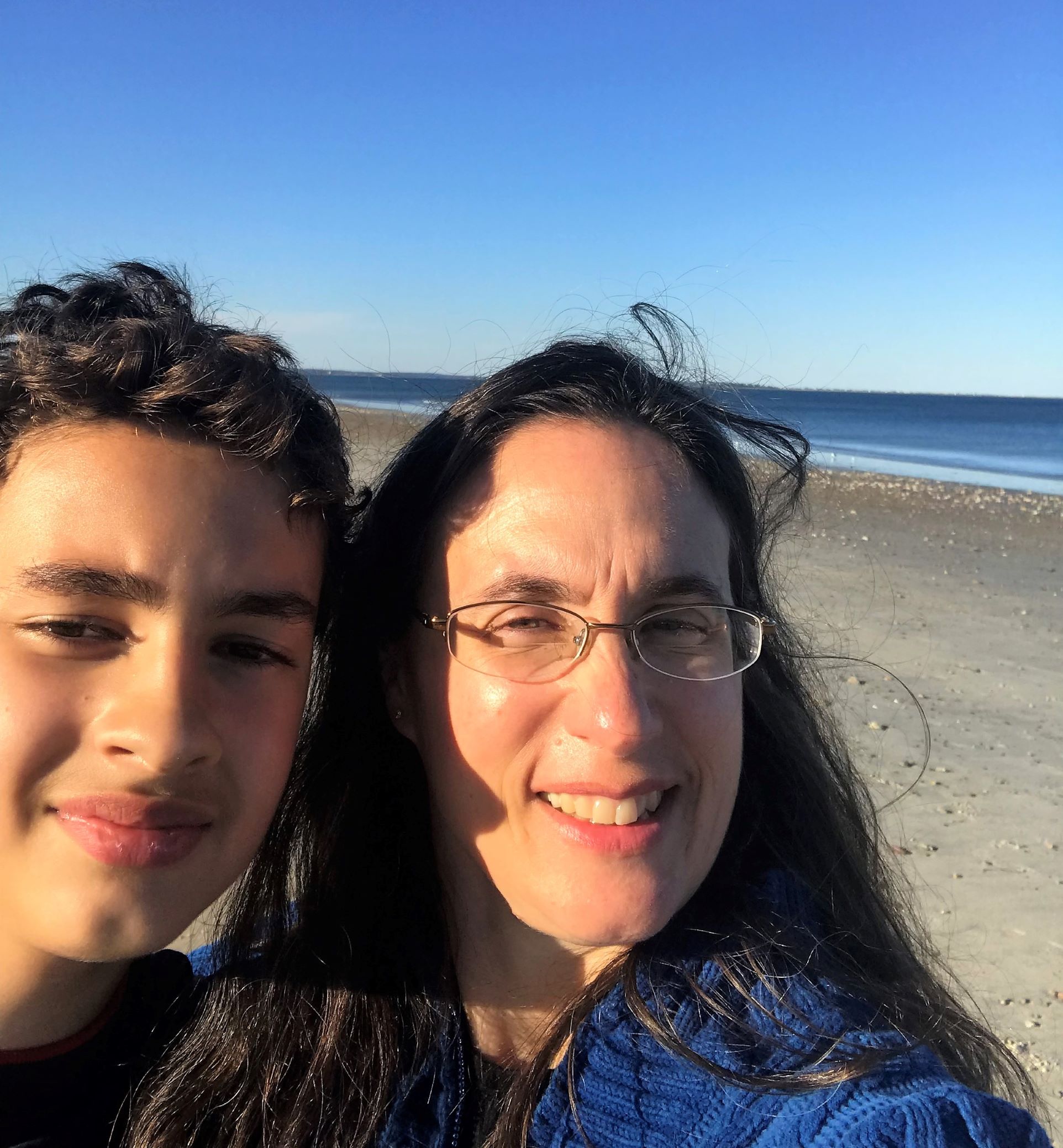 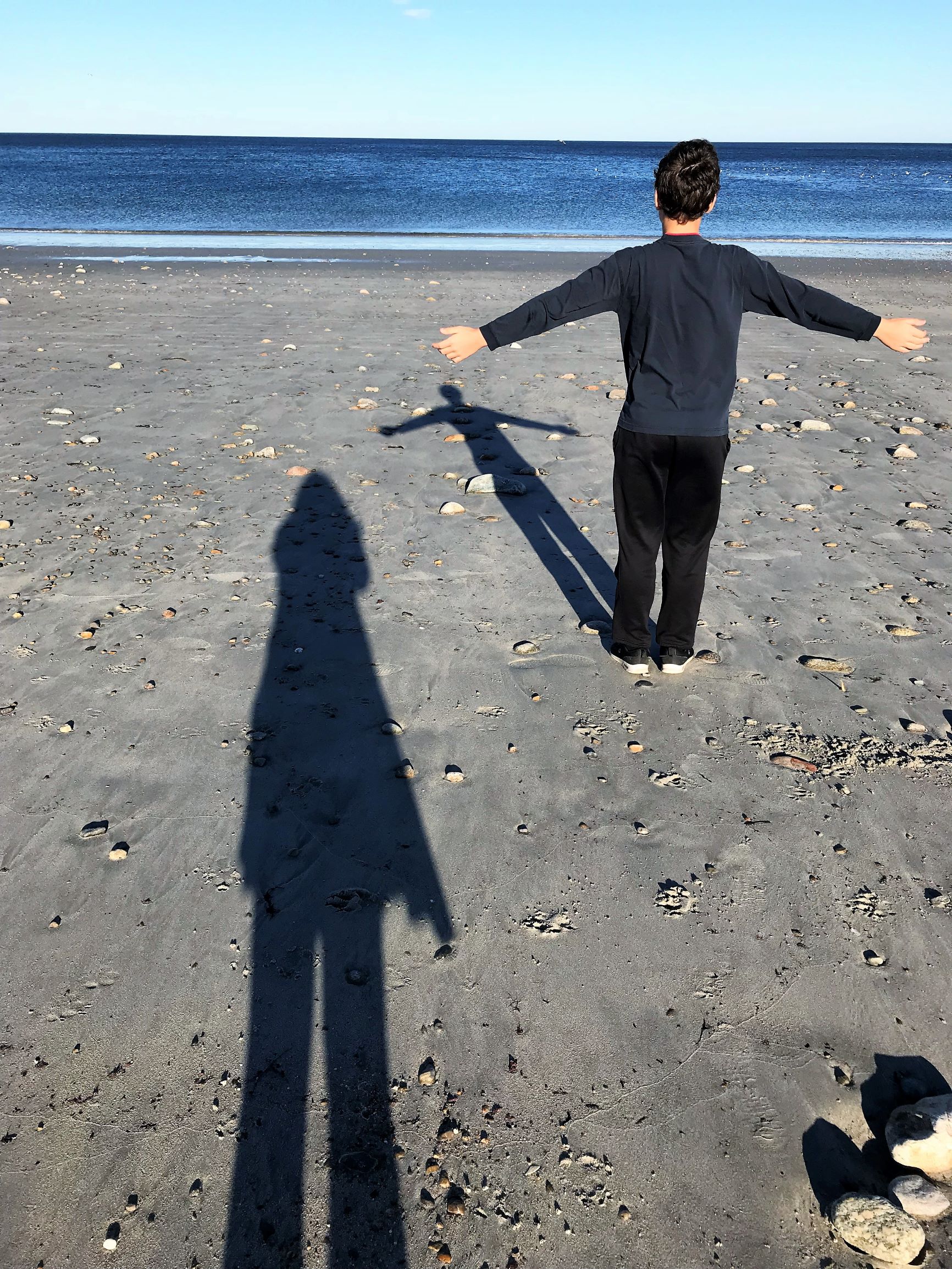 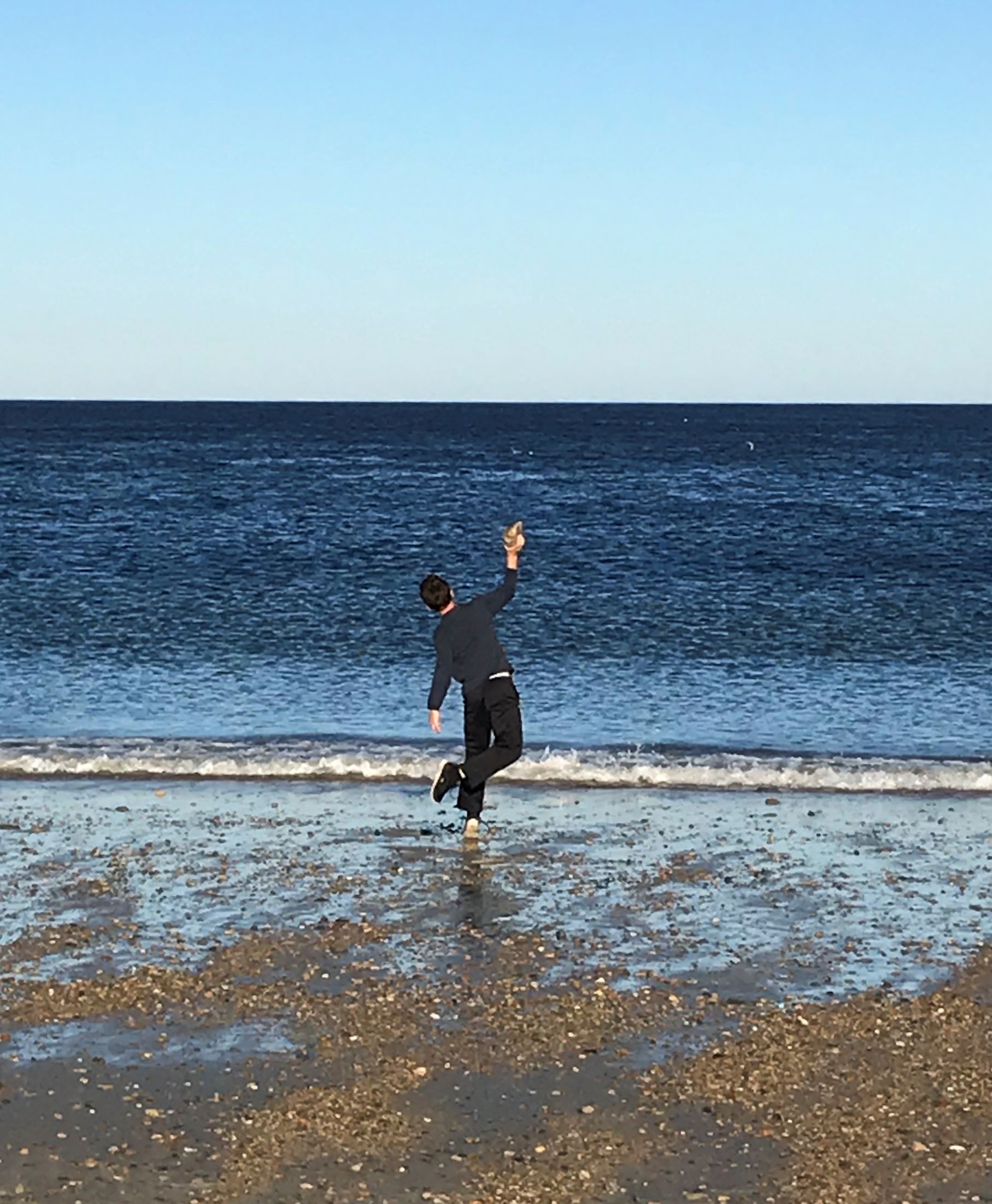 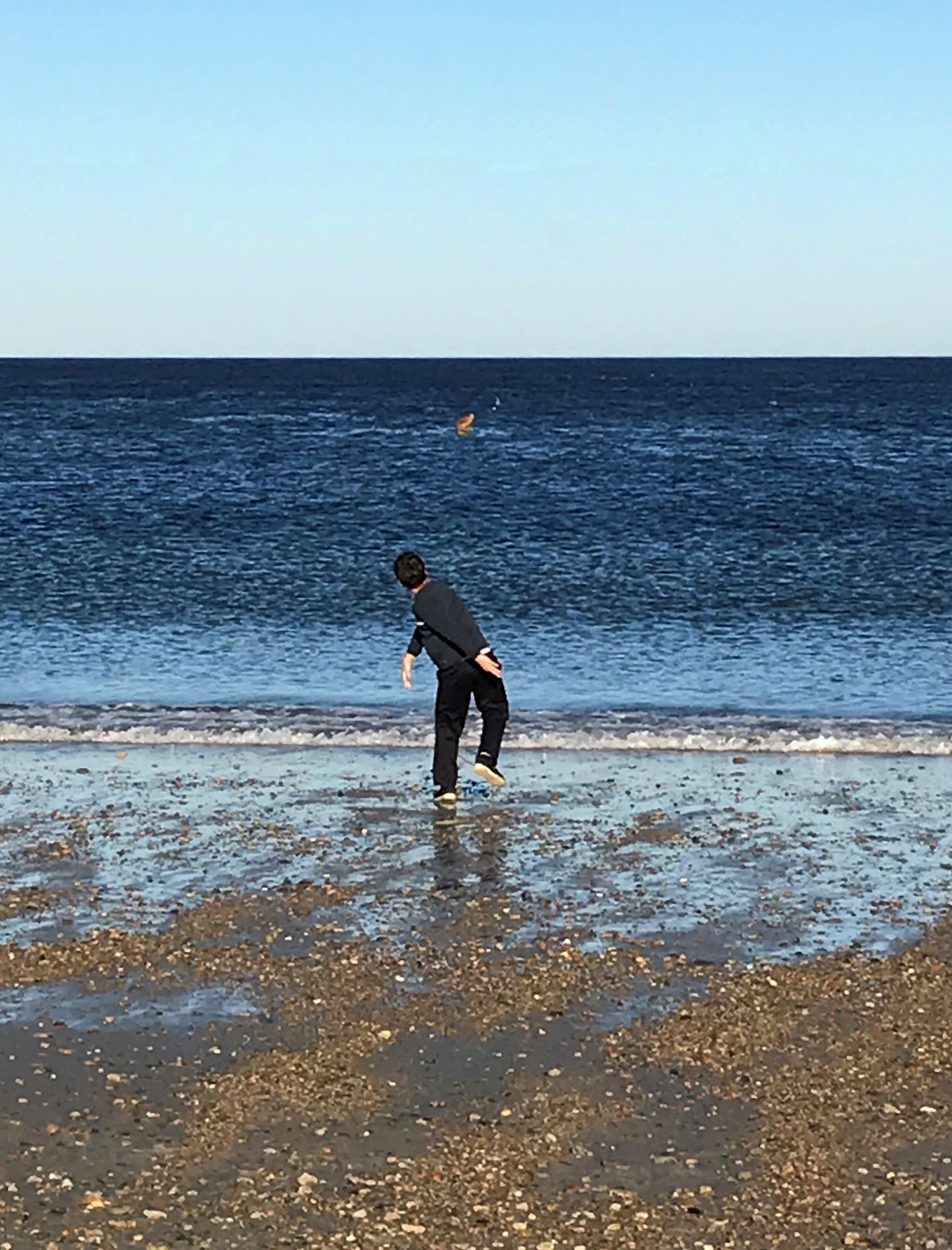 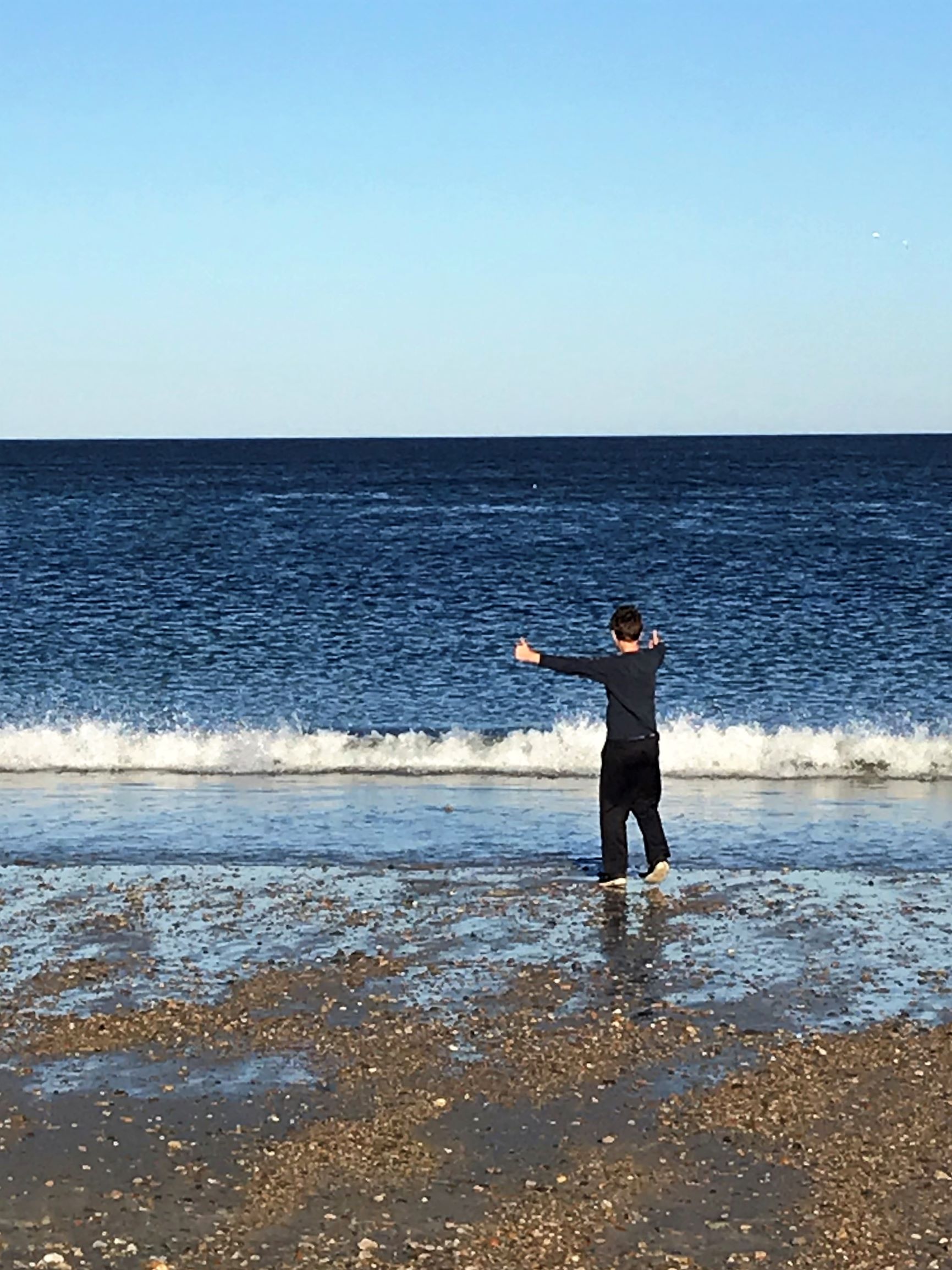 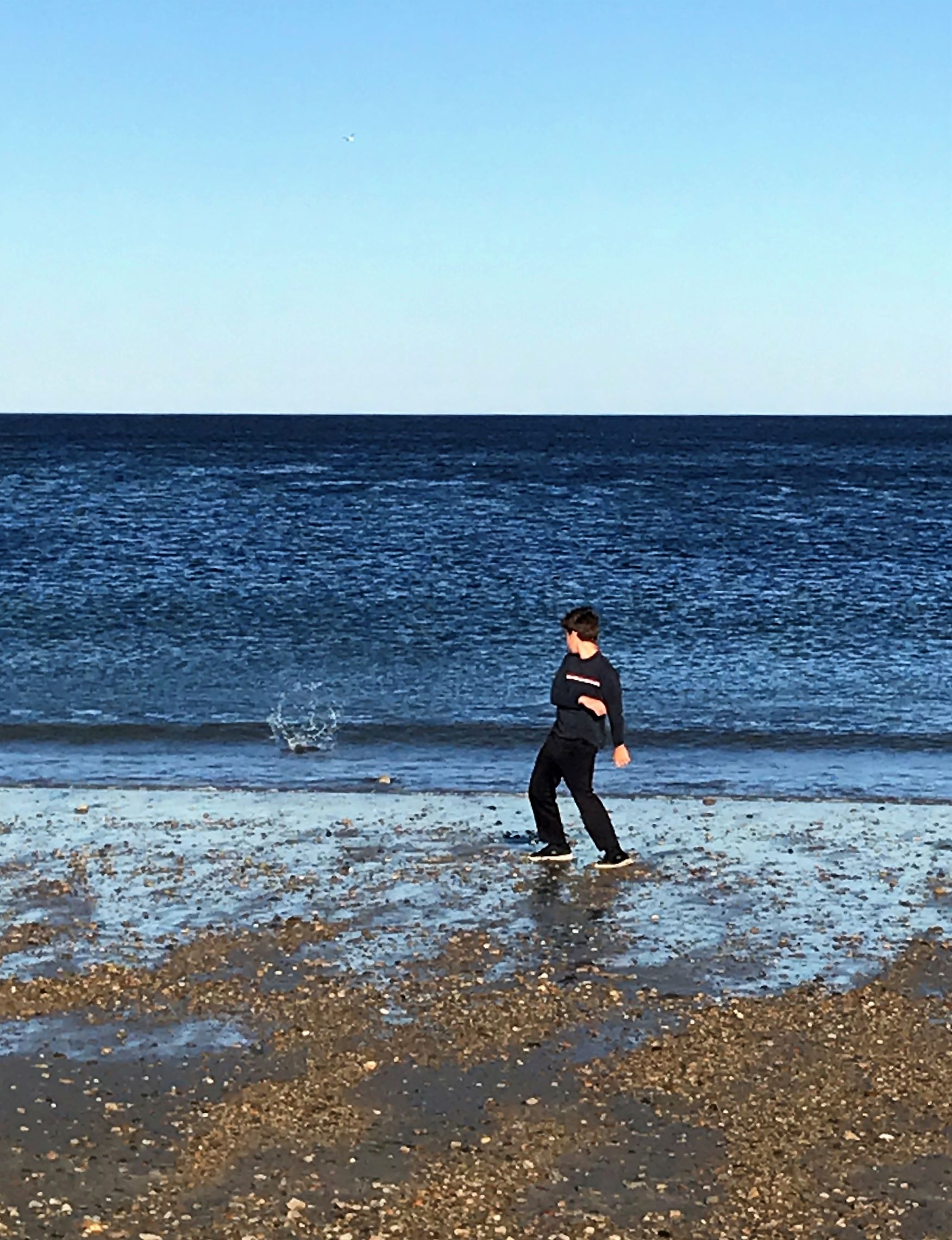 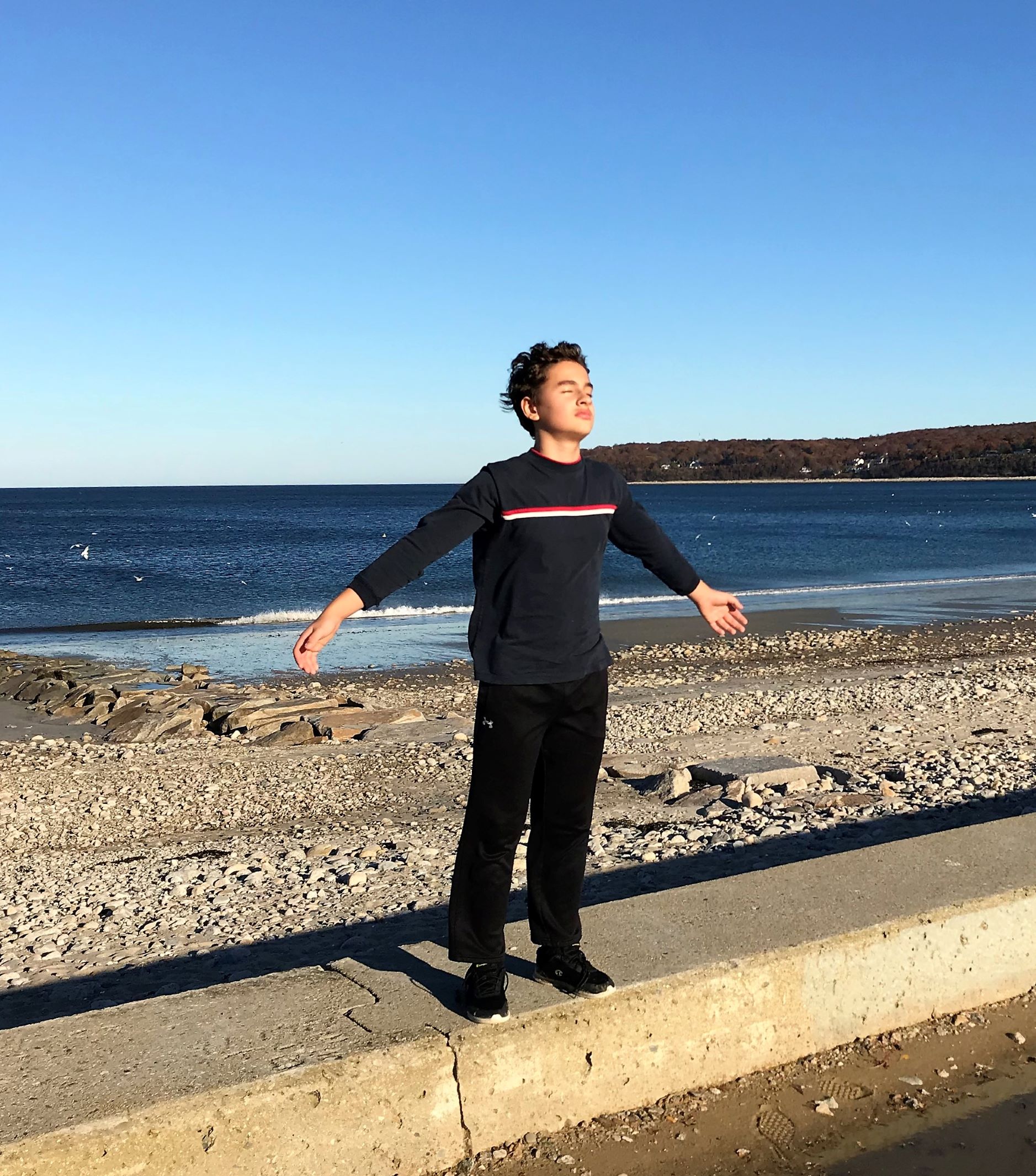 Ironically, we no longer had time to stop at the iconic rock.

Knowing how much my student enjoys old cemeteries, I wanted to take him instead to Burial Hill Cemetary where famous participants in the first Thanksgiving, like William Bradford and Squanto, are buried. It's where the first fort/meeting house was built. We enjoyed the view of the ocean the settlers actually would have had. Finally, having experienced the gravity of the location, with the sun casting long shadows, my student enjoyed the gravity that aids one down a steep hill, multiple times, stick in hand. 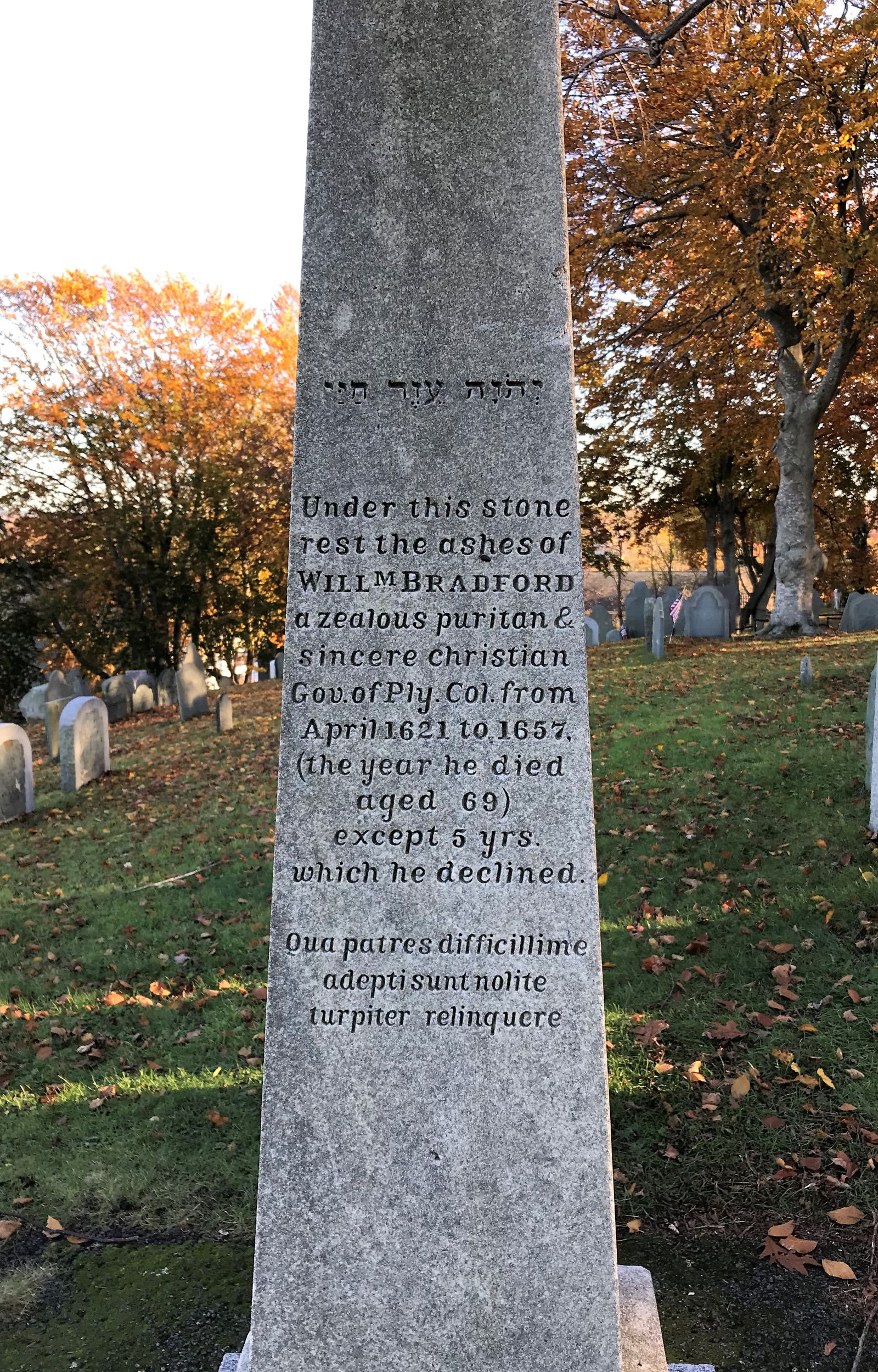 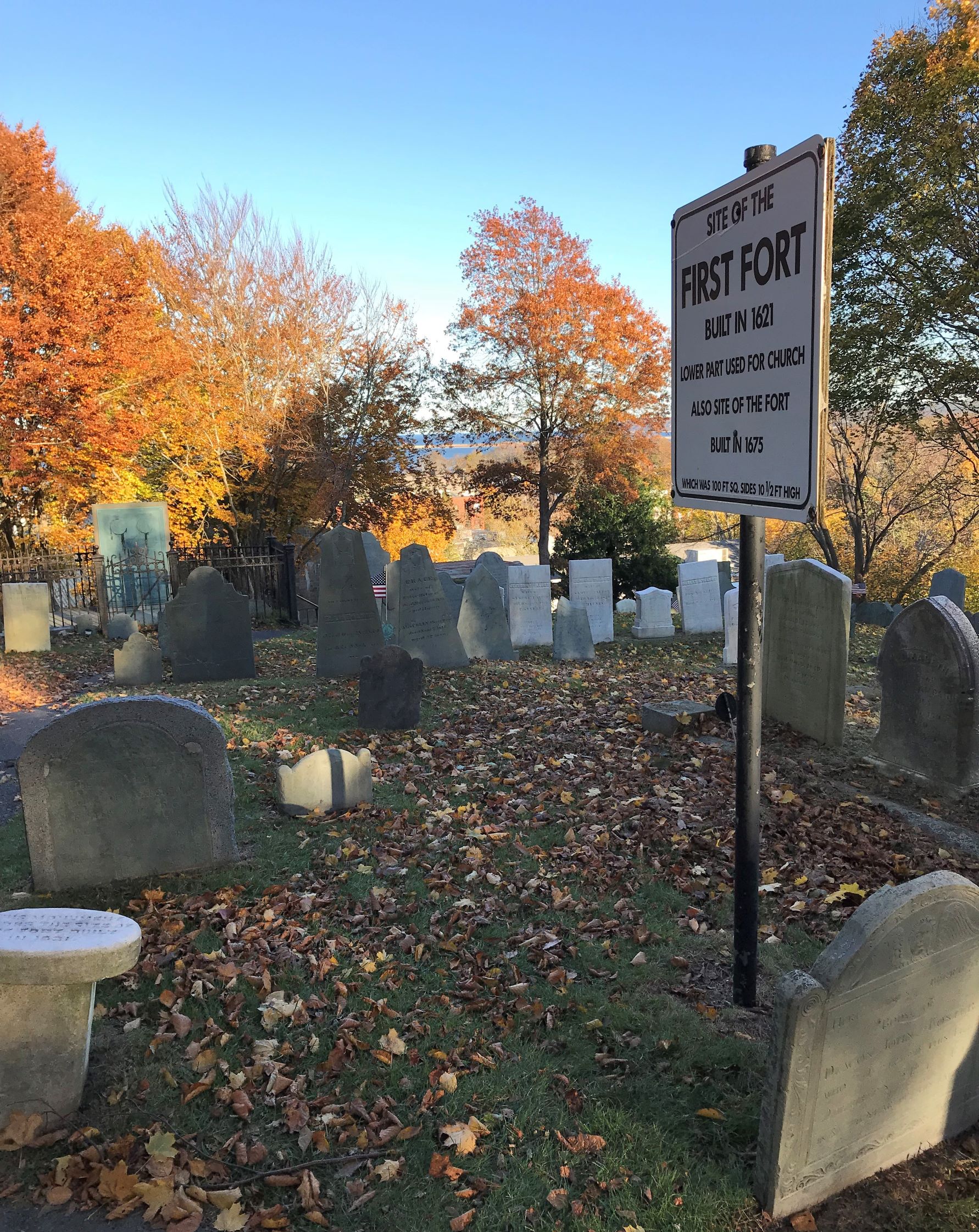 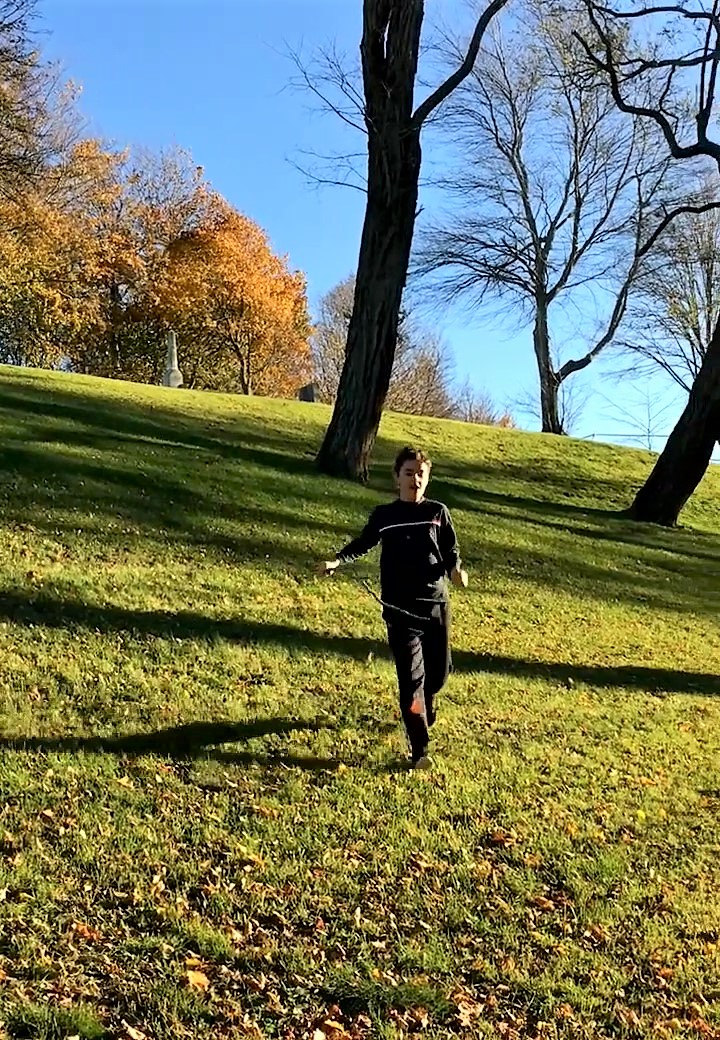 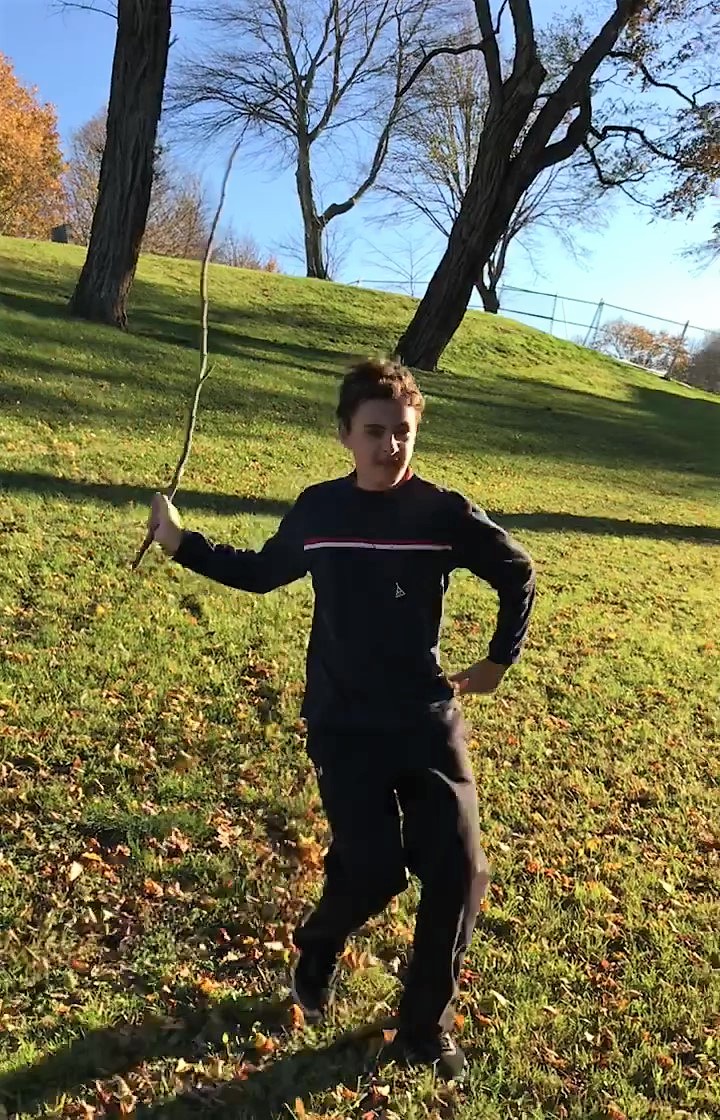 In a curious juxtaposition, less than 200 yards from the site of the first building the Pilgrims had built, there was a brand-spanking-new Town Hall. 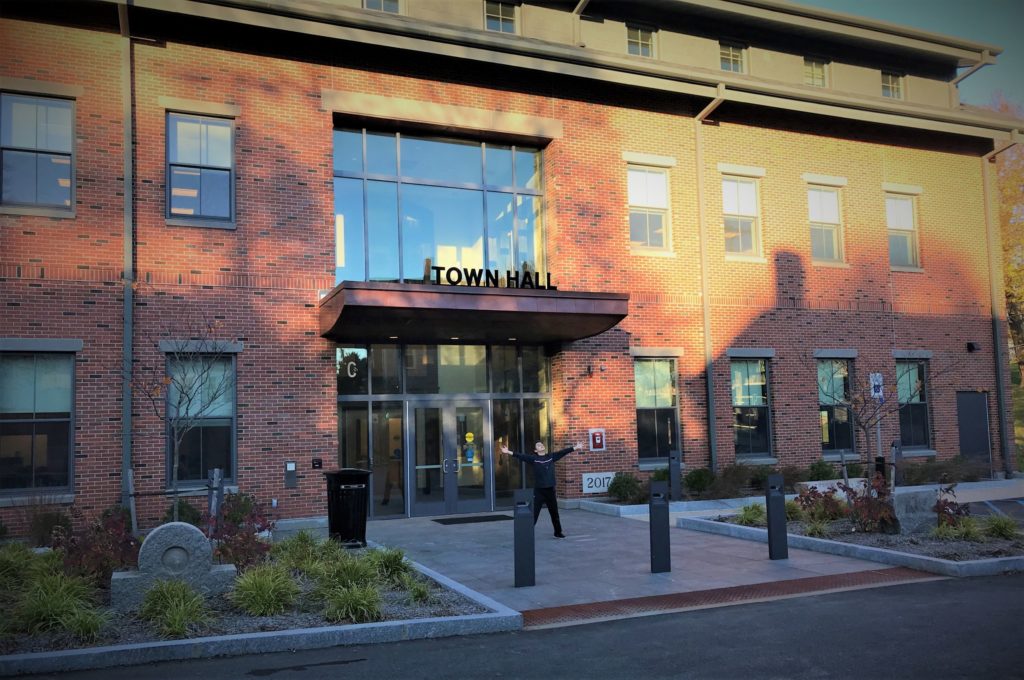 The last view of Plymouth we had was the golden hour at the harbor. It was a glorious sight. 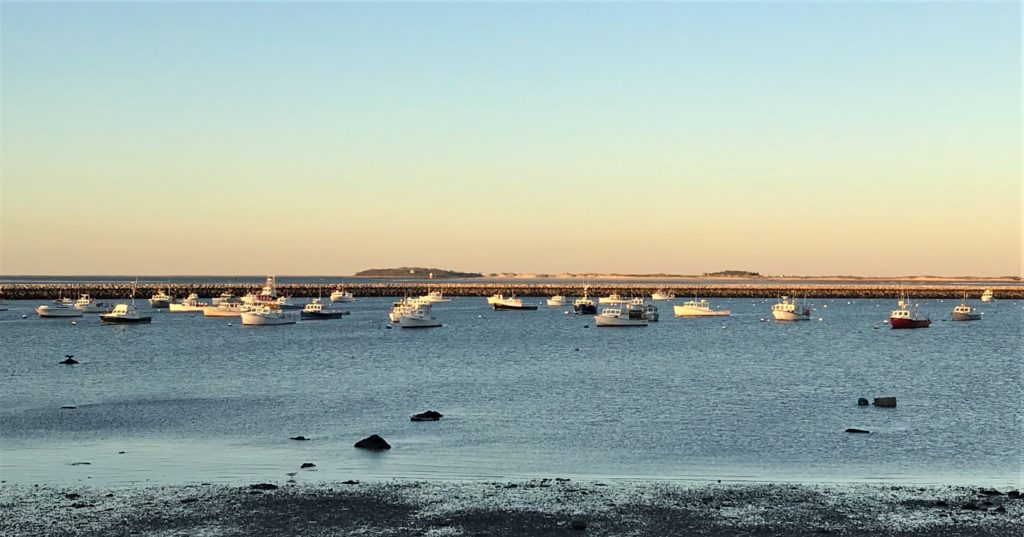 The trip home was quiet for the most part. I was pleased with how we overcame the prickle incident and were able to fit in most of my itinerary. But sometimes long car rides in the dark bring up interesting questions. My student surprised me by asking, "What is one thing you'd like to do better?"

It was a departure from the usual, "What's your favorite food?" ("Sushi.") and "If you could have any superpower, what would it be?" ("Invisibility.") It sounded like he had an idea of his own. "What's one thing you'd like to do better?" I asked.

"Hmm. I was going to say the same thing!" It was true. I had been thinking I really should do better at encouraging self-directed learning. Then I explained about unschooling, where the student decides what he wants to learn, where the student is the driver of education. I think he was startled and I got some resistance. But isn't that our job as parents, to get them to a place where they can teach themselves? Stay tuned as we try more "unschooling" techniques! We'll see what happens!

I'm inspired by the original Pilgrims who discovered that while freedom might be fraught with peril, it also has great rewards.

With Thanksgiving around the corner, it was great to see how some things come and go (thatched roofs) and other things endure (children are still expected to help with the dishes).  And as long as you have a stick in hand, it's fun to find out about your country's and your family's heritage. Here's hoping it sticks.