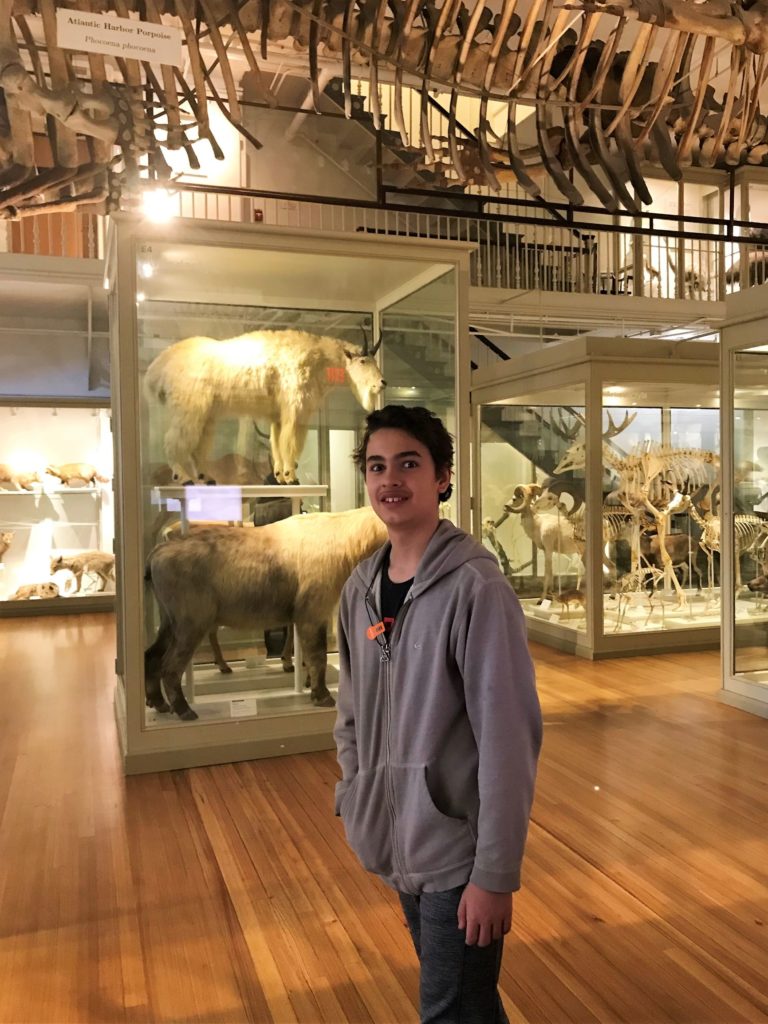 The Harvard Museum of Natural History and Peabody Museum of Archeology and Ethnology are located on the Harvard University campus in Cambridge, MA. They share a building and an admission fee—it’s like two, two museums in one! My local town library did not have any discounted admission as they had had for the aquarium—but for one adult and one student, I only paid a total of $25 which covered both museums. For the sake of brevity, I will refer to them as the Harvard Museum and the Peabody Museum.

While a day at the museums takes a bit of planning, it's well worth the effort. They don’t have their own parking, but there is a parking garage nearby and visitors can get a discount. We were able to utilize our favorite Uber driver (my husband) instead.

Here are some highlights of the day we spent exploring both museums with a break for lunch in Harvard Square.  Or, as I like to call it...

10. The Hall of Minerals is just like Minecraft, only with real rocks!

My student initially delighted in seeing actual specimens of diamonds, emeralds, and quartz that Minecraft players prize so highly, but then he became fascinated with everything else on display. 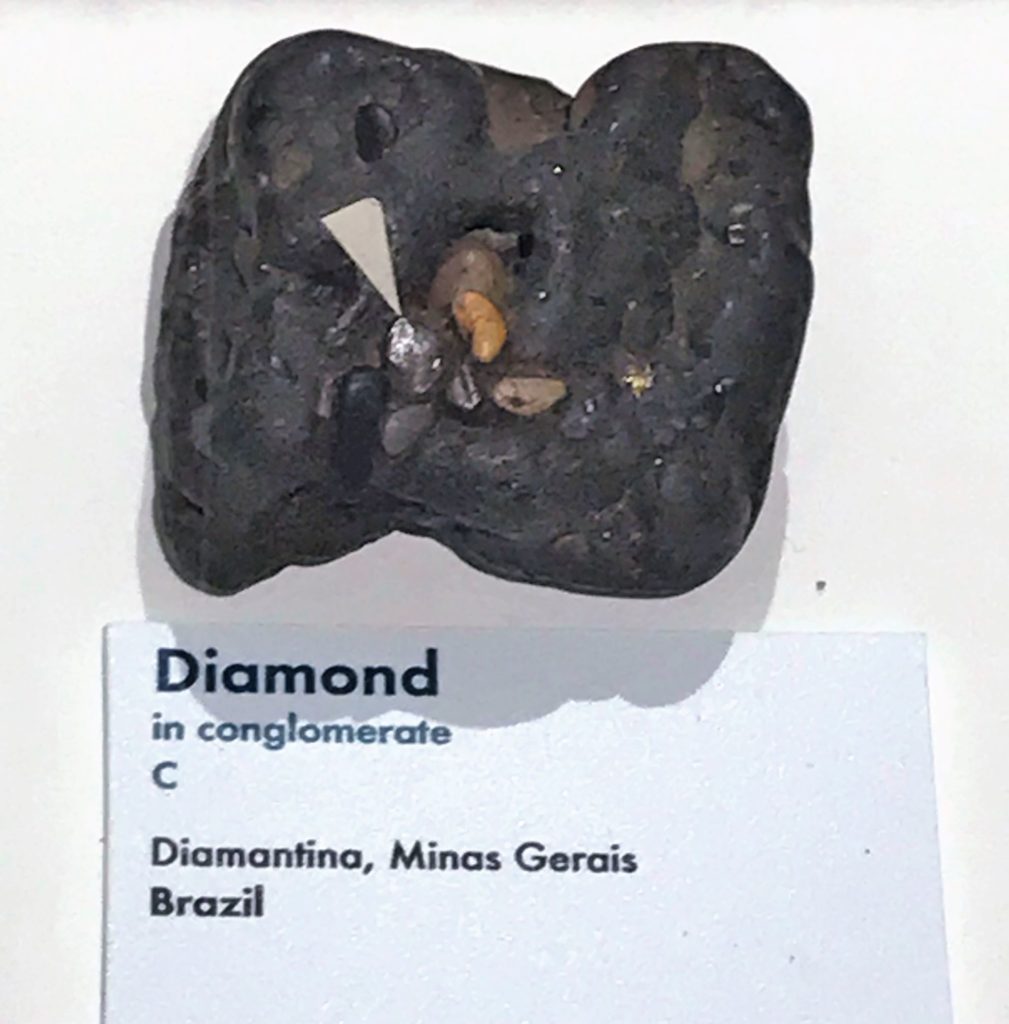 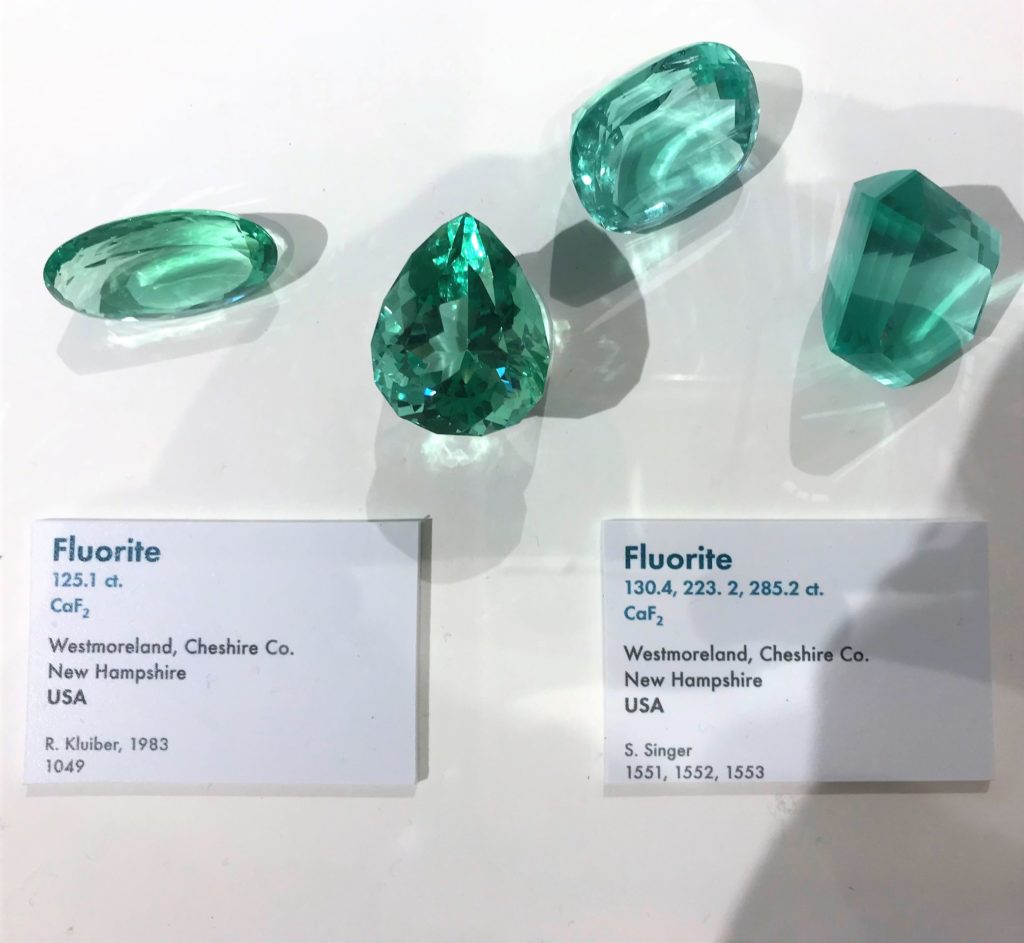 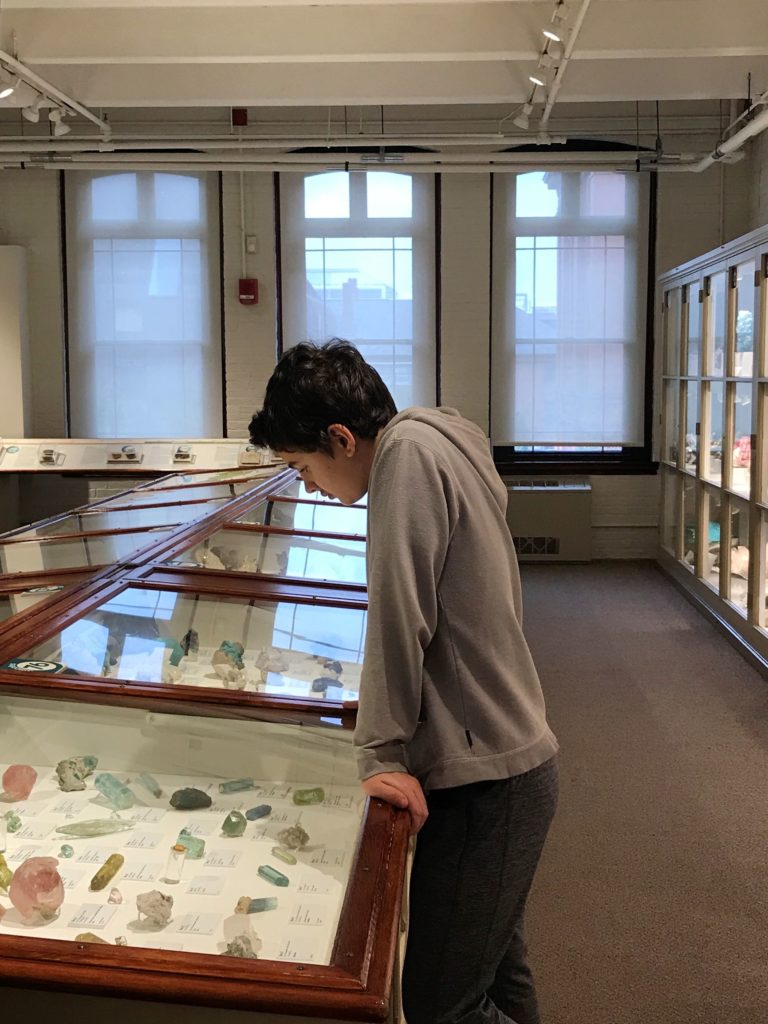 He kept taking pictures with my phone. 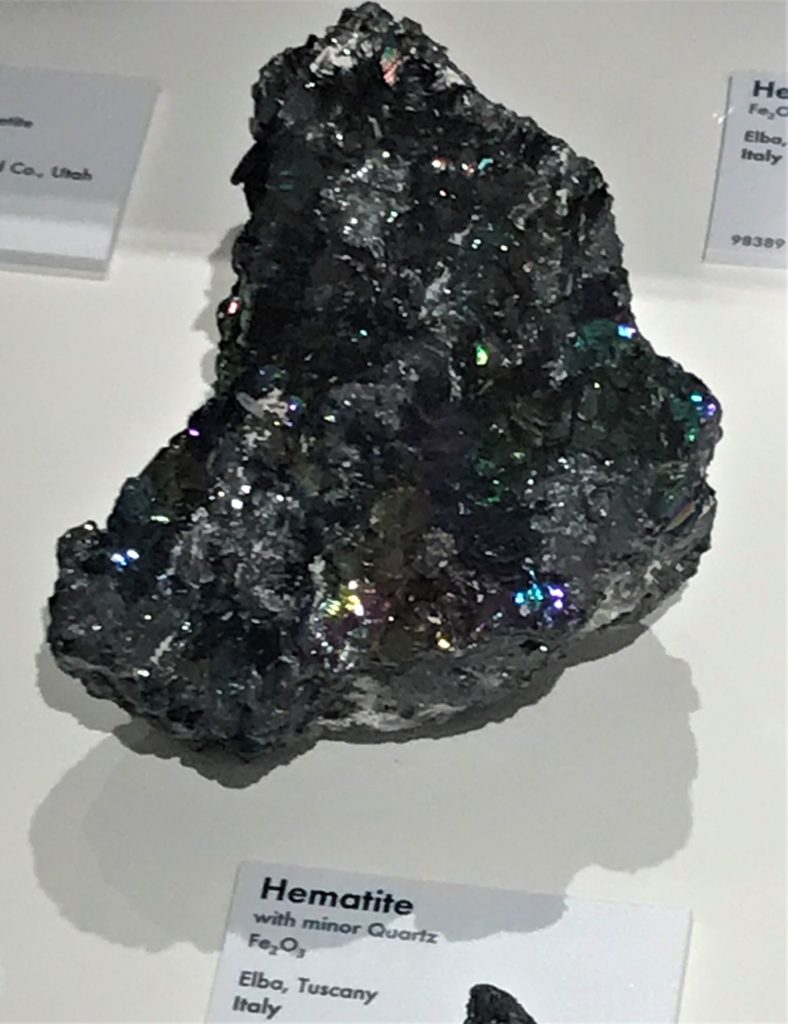 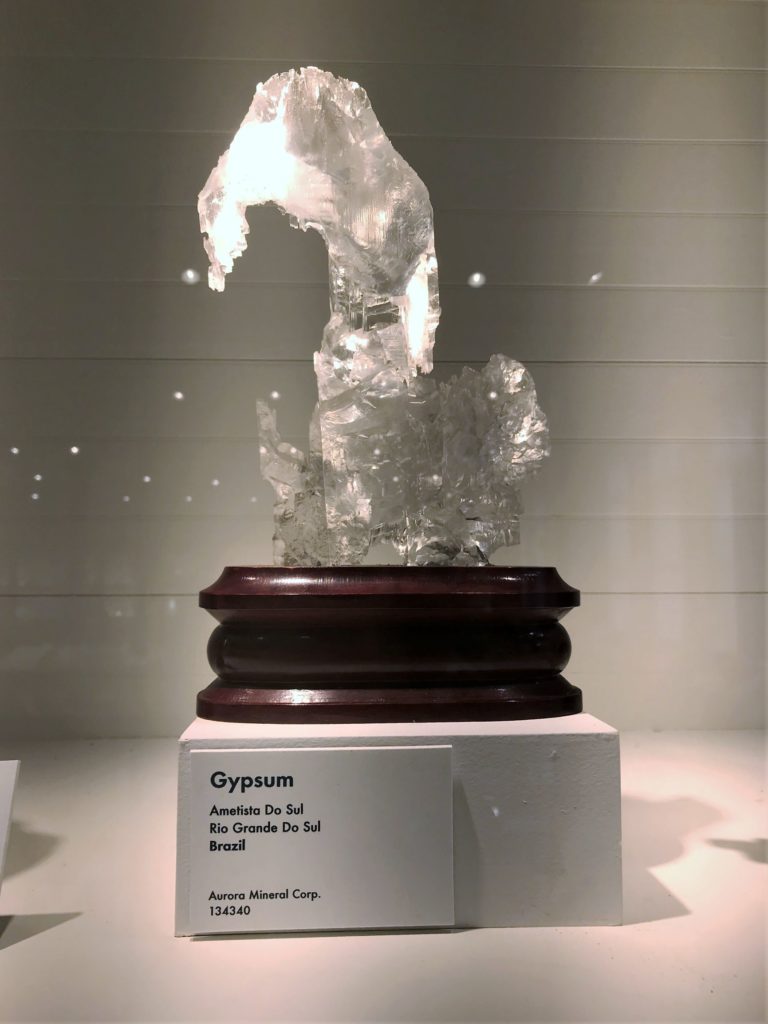 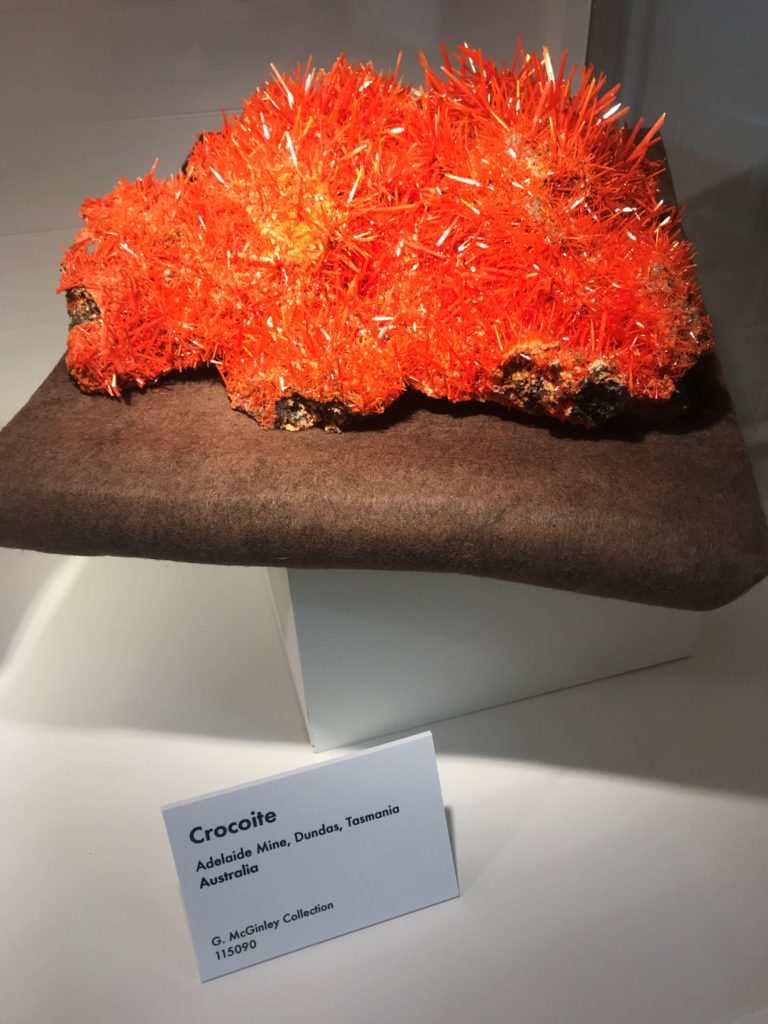 Eventually, I got it back from him and made this cool time-lapse as I walked around the entire room.

We stayed for an hour initially, but still hadn’t taken in everything. 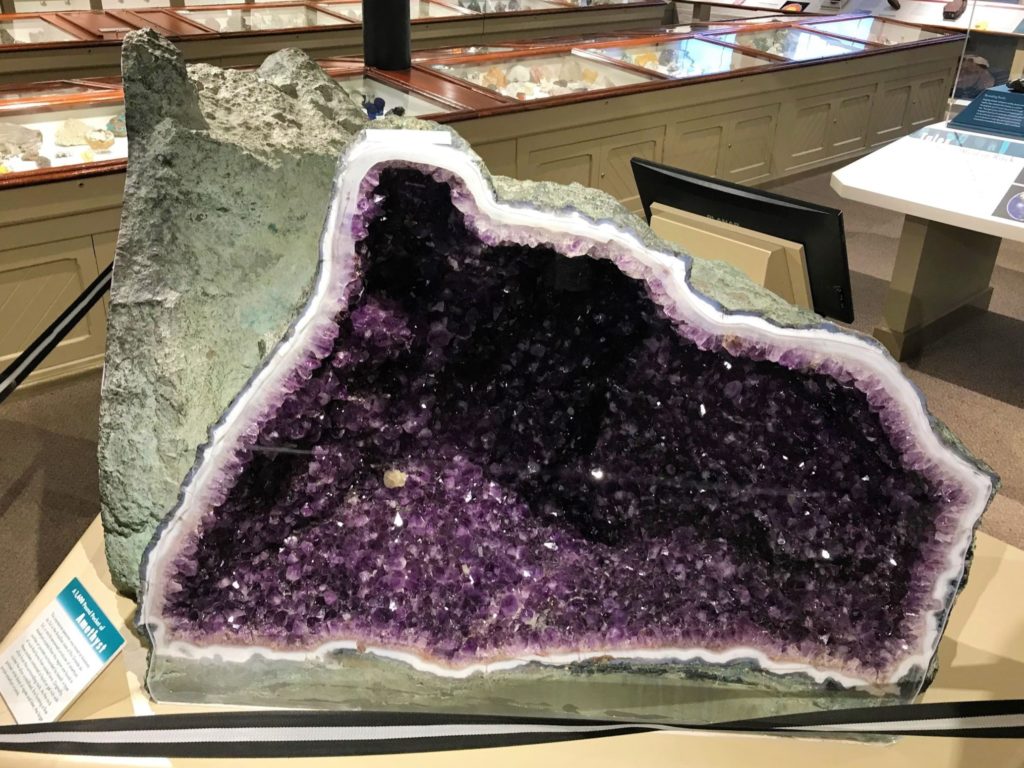 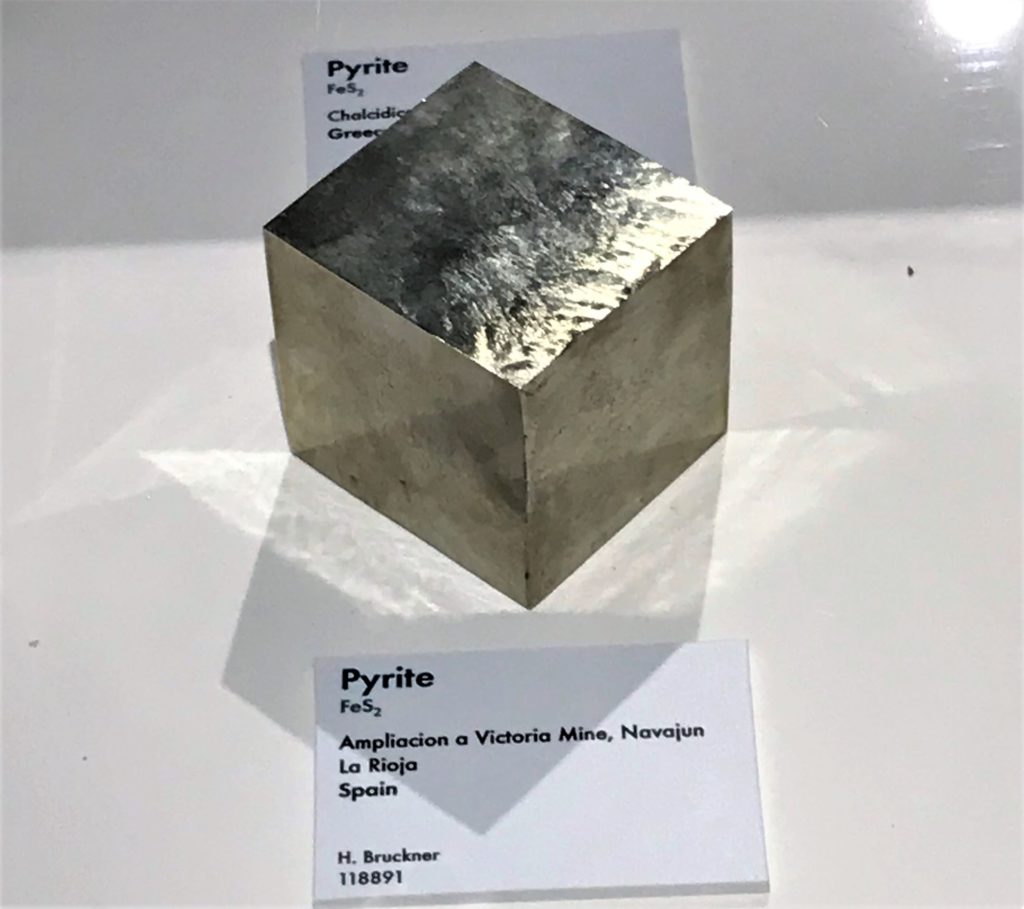 We kept coming back throughout the day to make sure we saw every eye-catching thing. 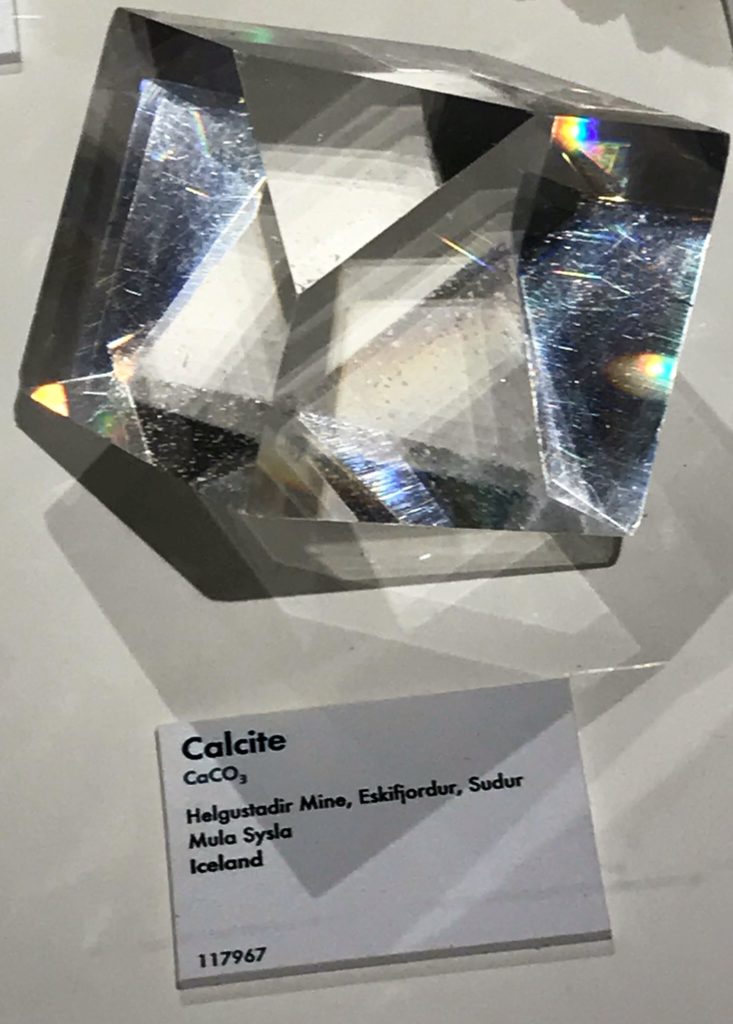 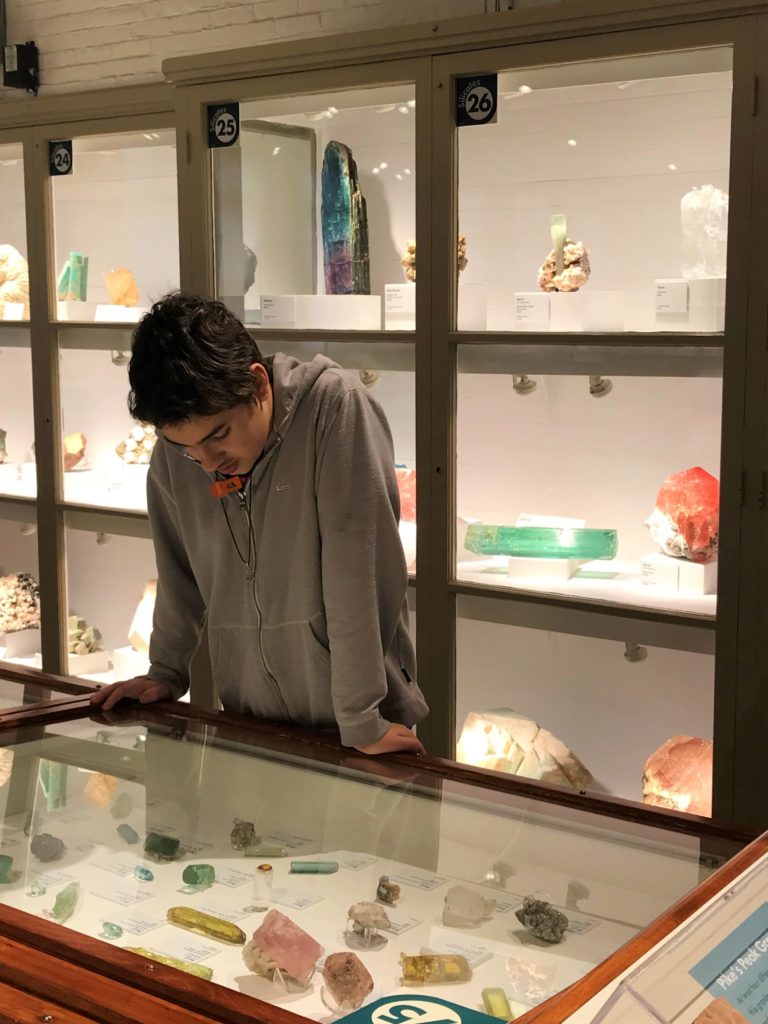 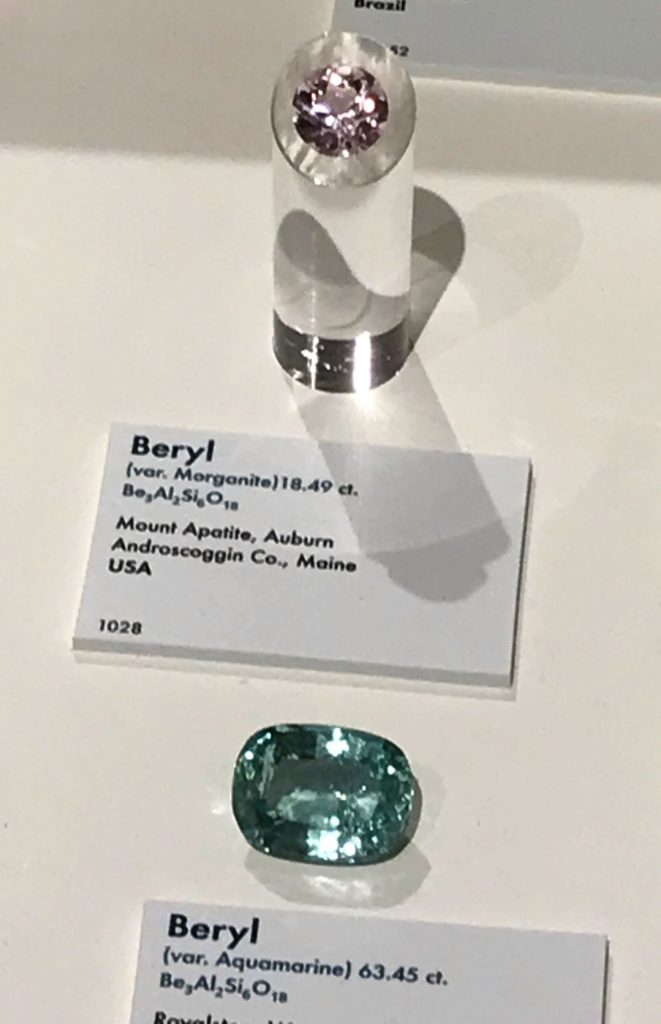 A favorite of my student's was this crystal that looked like a watermelon. 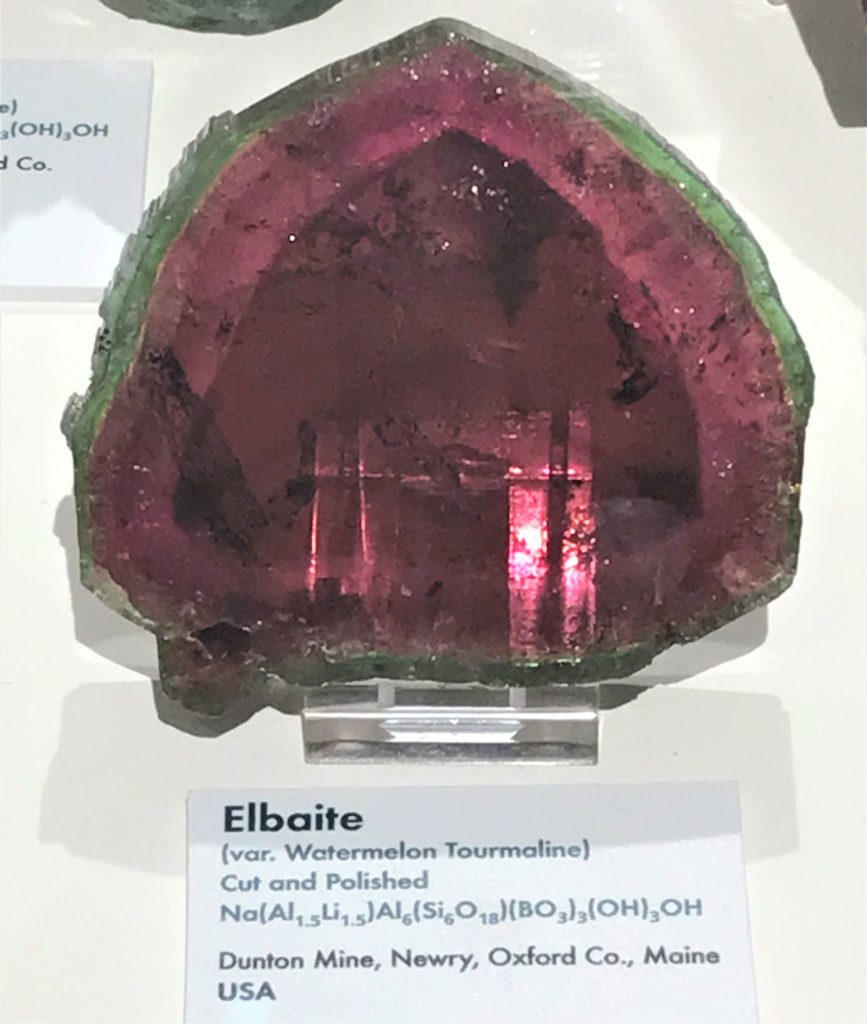 Compare it to an actual picture of a watermelon. 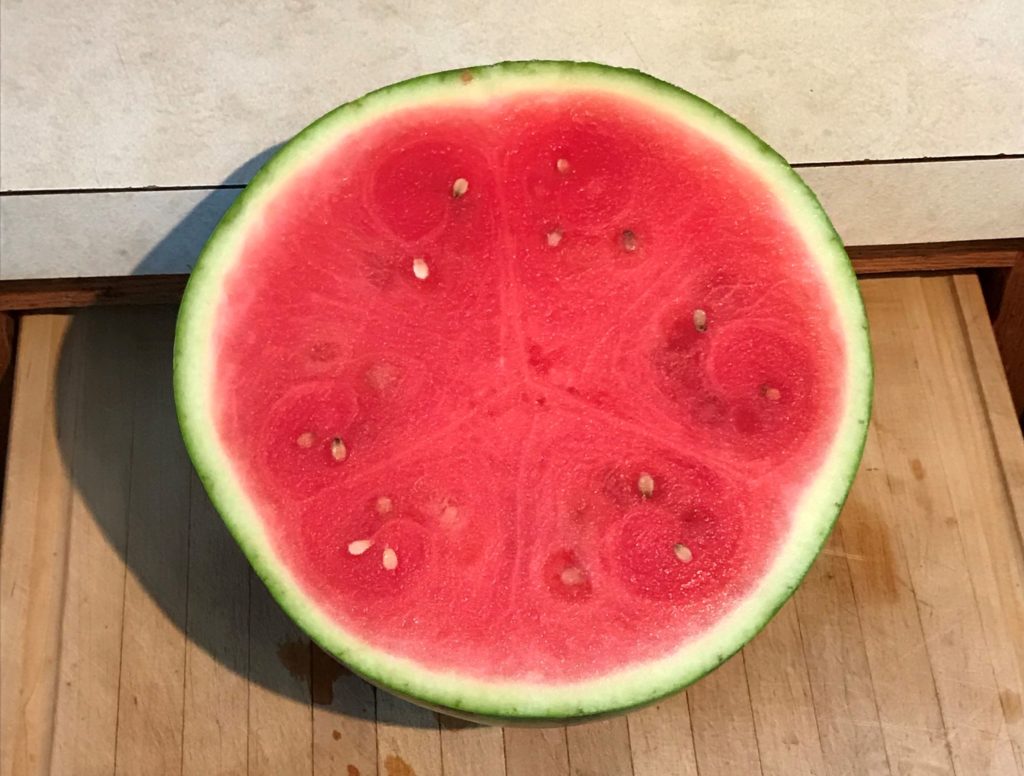 9. The Hall of Minerals includes an education in crashing celestial bodies.

Because of light attendance at the museum, my student got to play with the interactive display on asteroids colliding with each other until he mastered it. Through the simulation, he experimented with different combinations of trajectories and velocities of two virtual asteroids. Over and over and over. He's always claimed to love physics; I guess it's true.

8. The Glass Flowers exhibit has a replica of a venus flytrap!

The famous glass flowers are always described in the same glowing fashion. "Amazing!" "Perfect!" But all I could picture were rows and rows of cases filled with life-size wildflowers, all pretty much the same. But it wasn't the volume that was staggering, it was the diversity. The Harvard Museum's collection of 3D botanical glass specimens includes flowers, but also things like a reproduction of a venus flytrap, roots and all. It is my student’s favorite plant because it kills bugs, and he hates bugs almost as much as he loves physics. 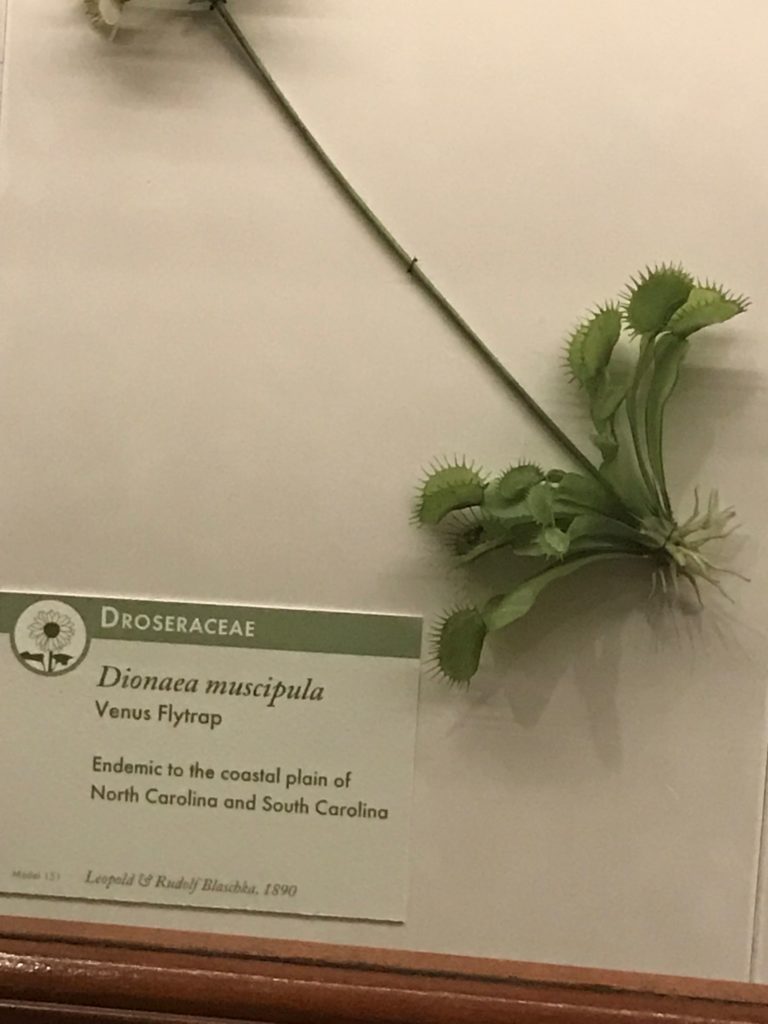 Compare it to our actual venus flytrap plant. 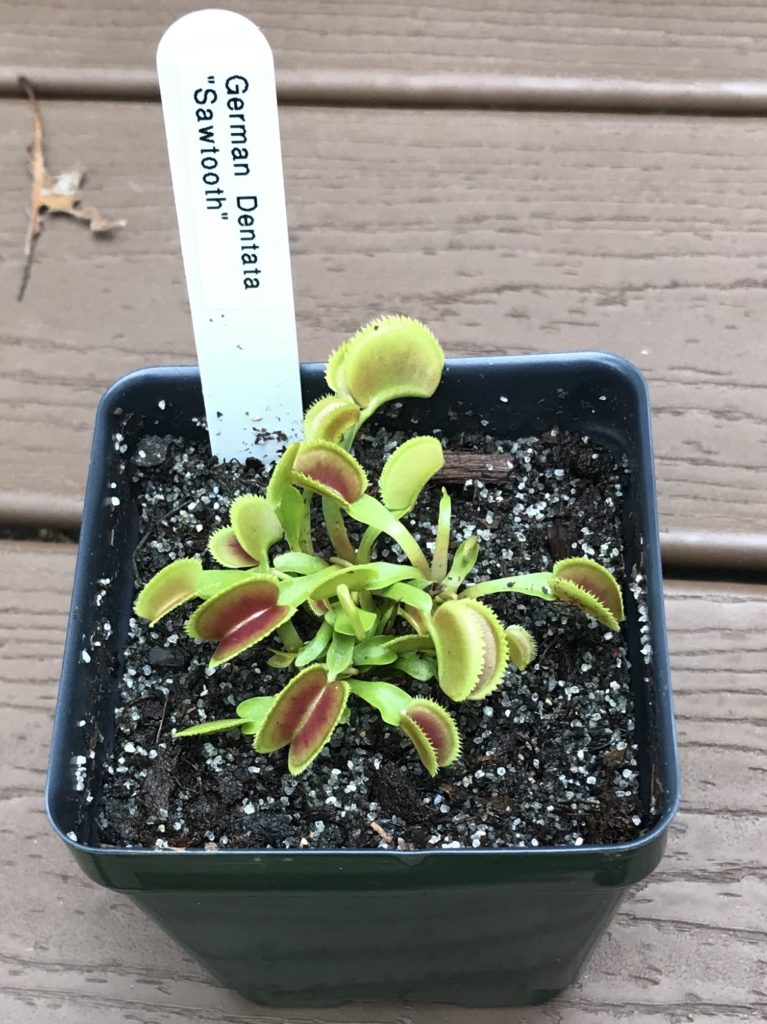 (We named it Hydra.)

The collection includes non-flowers like apples in various stages of rot, and this rice plant. 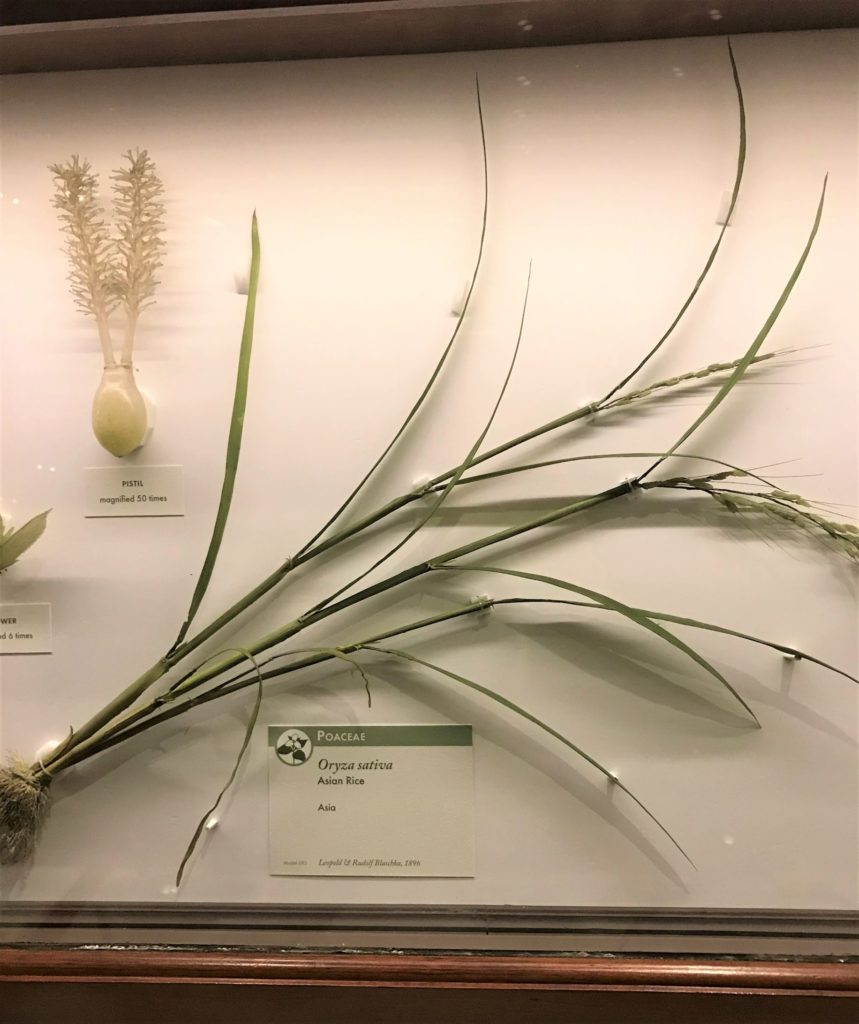 Scientifically accurate? Yes. Aesthetically pleasing? Also yes (since it's scientifically accurate). I remember reading somewhere that Teddy Roosevelt attended Harvard and majored in Botany. (He was an average student, yet still managed to become president. Haha.) It was cool to think that he might have used these very items, but they were created after he left. Alas, my student tired of them before I did.

7. You can go back in time by just pulling out metal drawers.

One of the exhibits at the Peabody Museum described an archaeological dig on the Harvard campus itself. 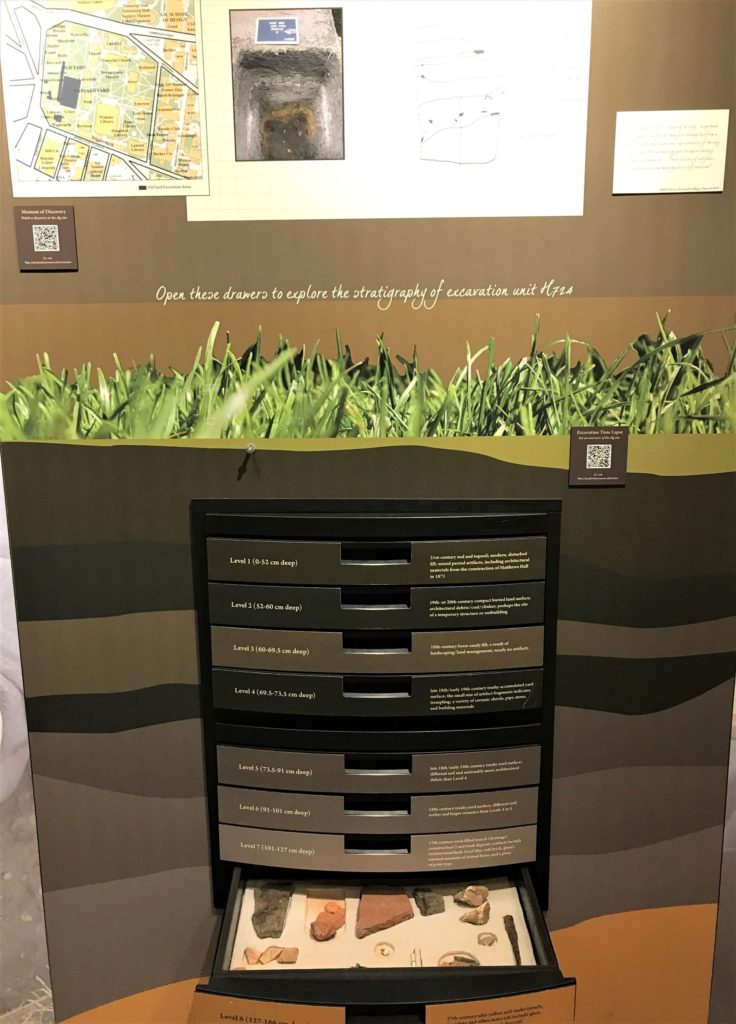 My student enjoyed opening each drawer and discovering what had been found in that layer of soil. The bottom drawer contained things from the earliest days of Harvard.

It highlighted a topic that is near and dear to my heart, the Christian Native Americans of the 1600s, a largely forgotten piece of history.  Here was evidence that some of the first students at Harvard were Native Americans studying to be ministers. 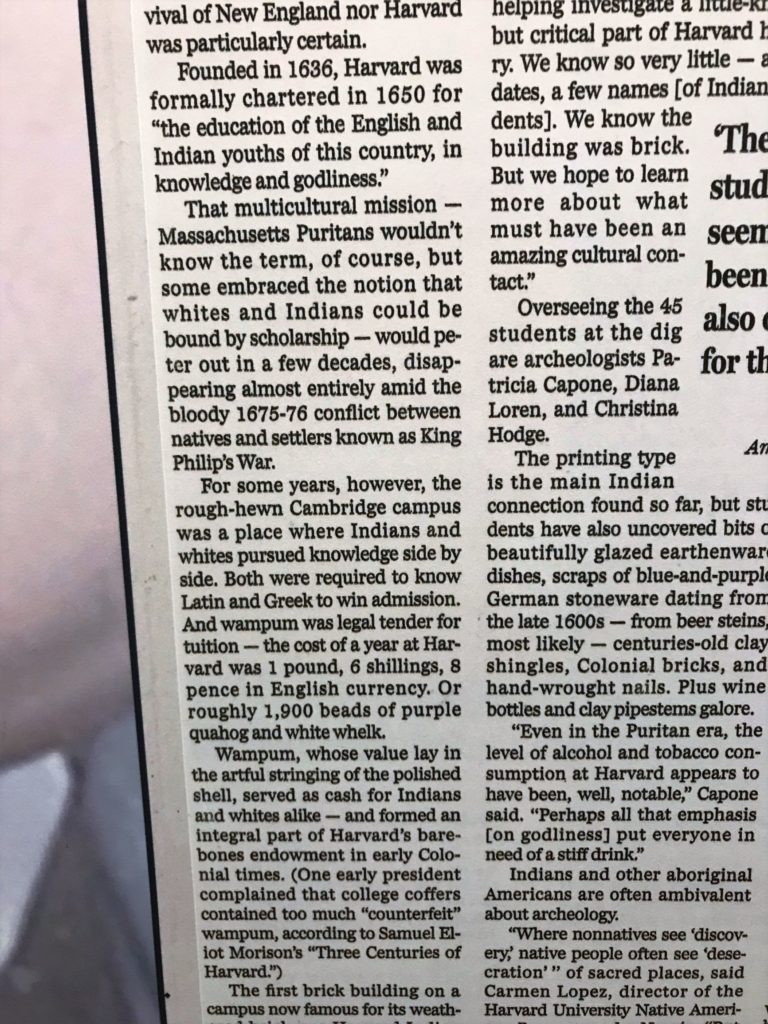 6. Where else can you see a helmet made out of a pufferfish?

The Peabody Museum also had a large display of weapons and armor including this crazy get-up. 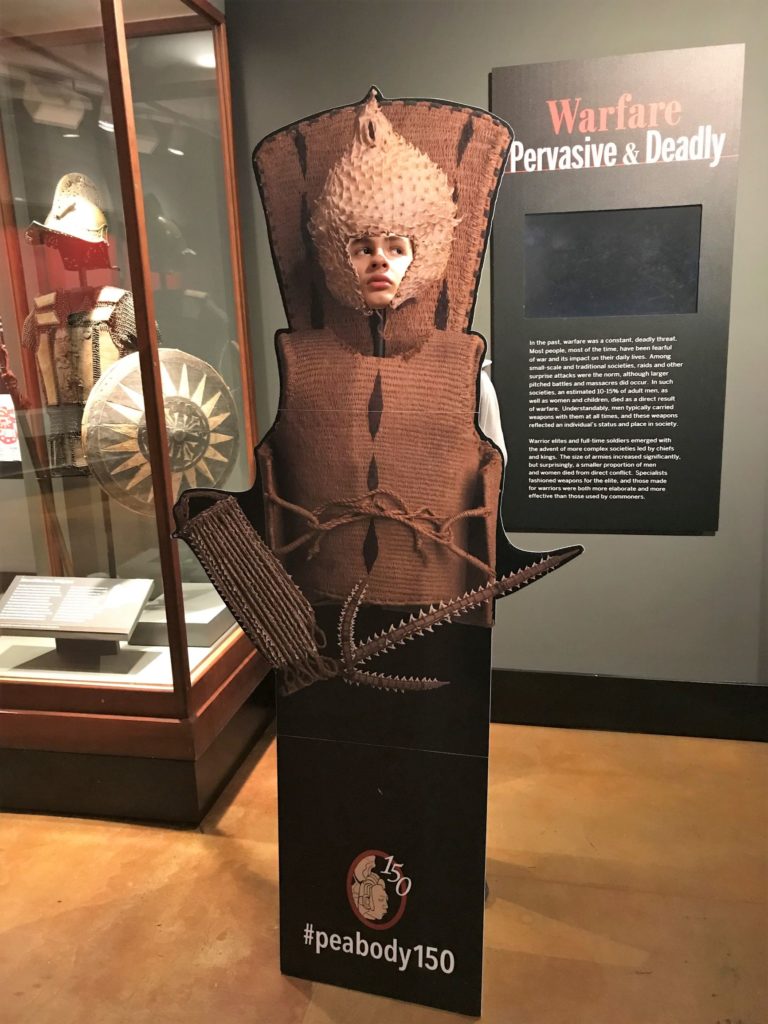 This was clearly a photo-op mockup but the actual pufferfish helmet was nearby.

My student happily pointed out various kinds of weapons he had heard of before and other things that he found interesting. Later he quizzed me, wanting to make sure I was paying attention. I wonder where he got that idea?

5. The skeletons are as big as a house!

This ancient aquatic dinosaur wouldn’t even fit on my iPhone screen. 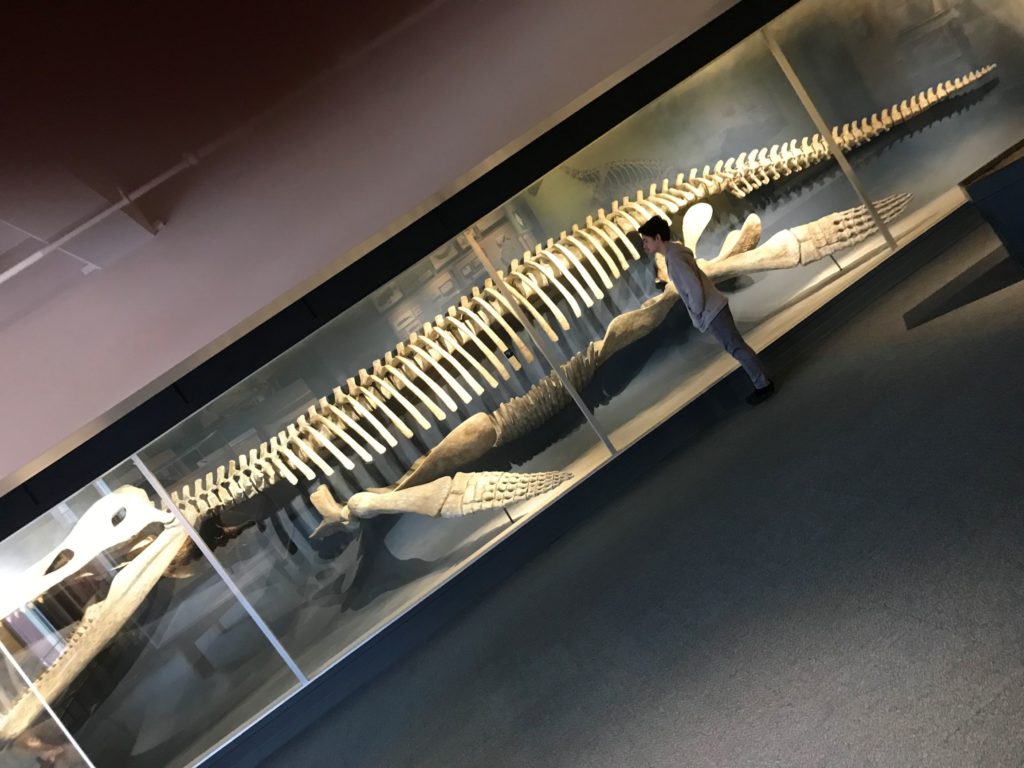 In another room, whale skeletons filled the space overhead and we climbed up into the balcony for a closer look. 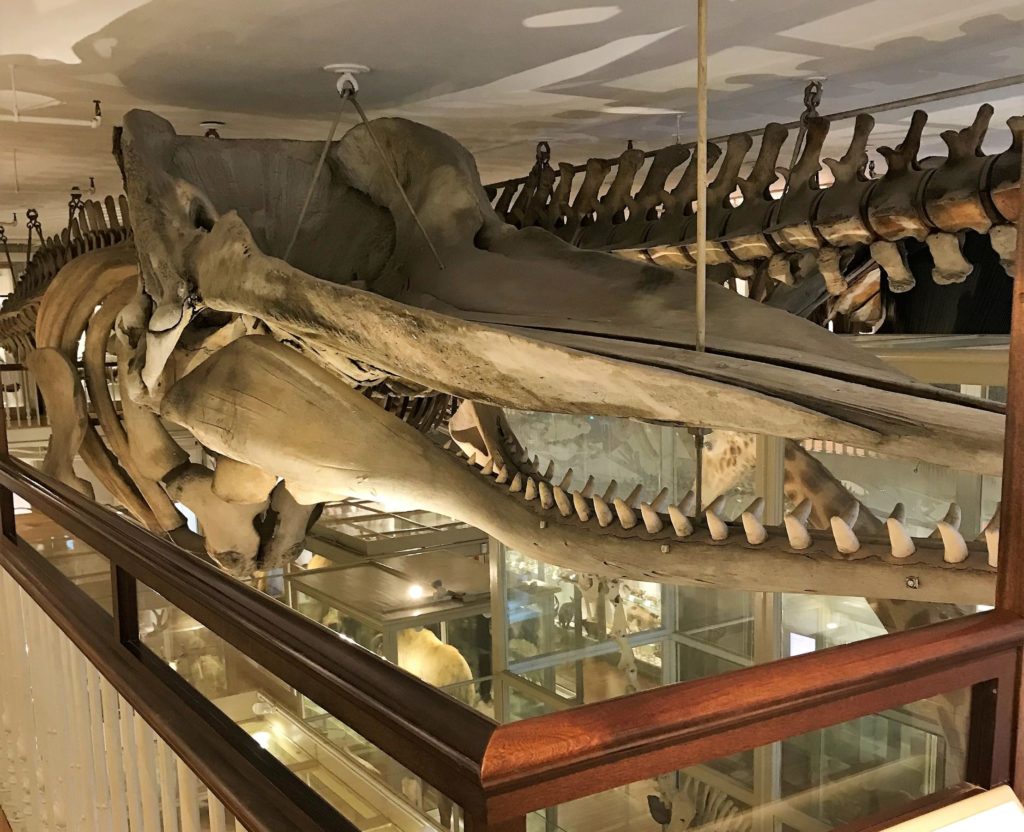 There was a sea cow skeleton that my student was strangely fascinated with. 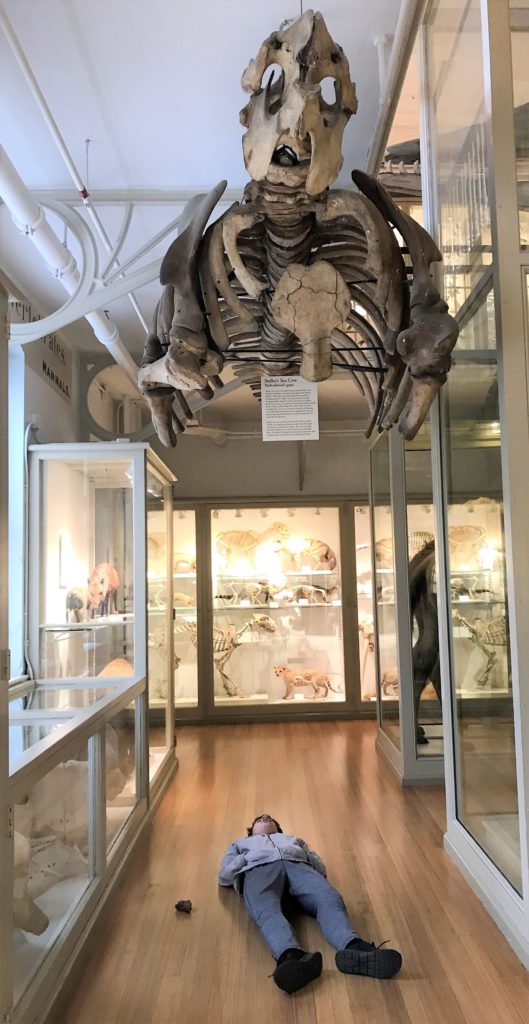 I can’t really explain what was going on here. My student can be weird.

And not just at the gift shop. Think taxidermy. The Harvard Museum has a wide variety of preserved animals. These were just the hummingbirds! 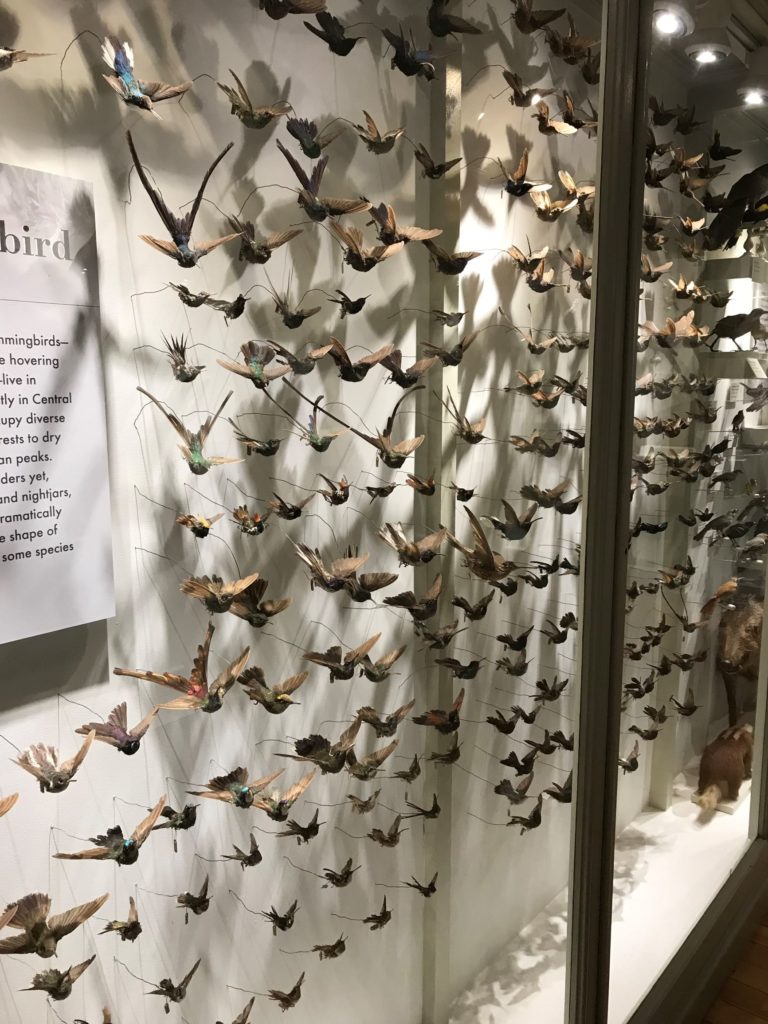 Other museums, like the Smithsonian, are much bigger and have higher ceilings and larger displays. But the Harvard Museum brings everything up close, like this gnatcatcher (which would never let you get this close in the wild)... 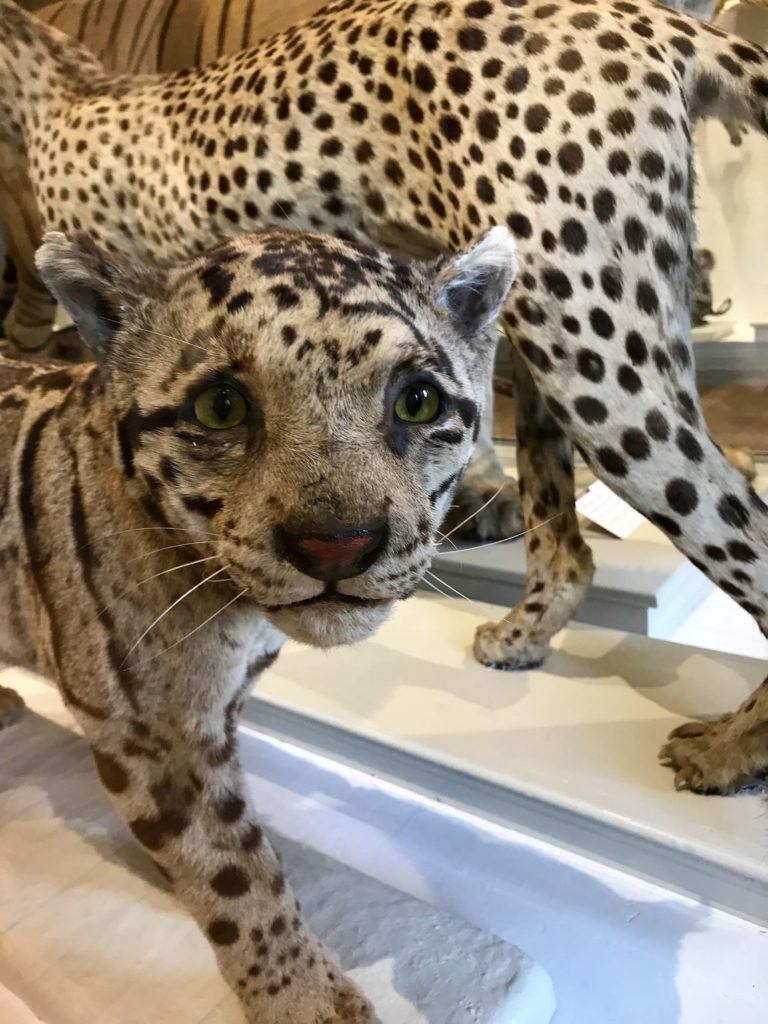 3. The tween might find out the exact species of the jellyfish that stung him when he was on vacation.

Luckily for us, whoever was responsible for the glass flowers also made glass models of sea creatures, too. As soon as my student saw this glass replica, he emphatically confirmed that, indeed, a Portuguese man o' war was indeed the exact species of jellyfish that stung him during our family vacation to the Texas coast in 2012. 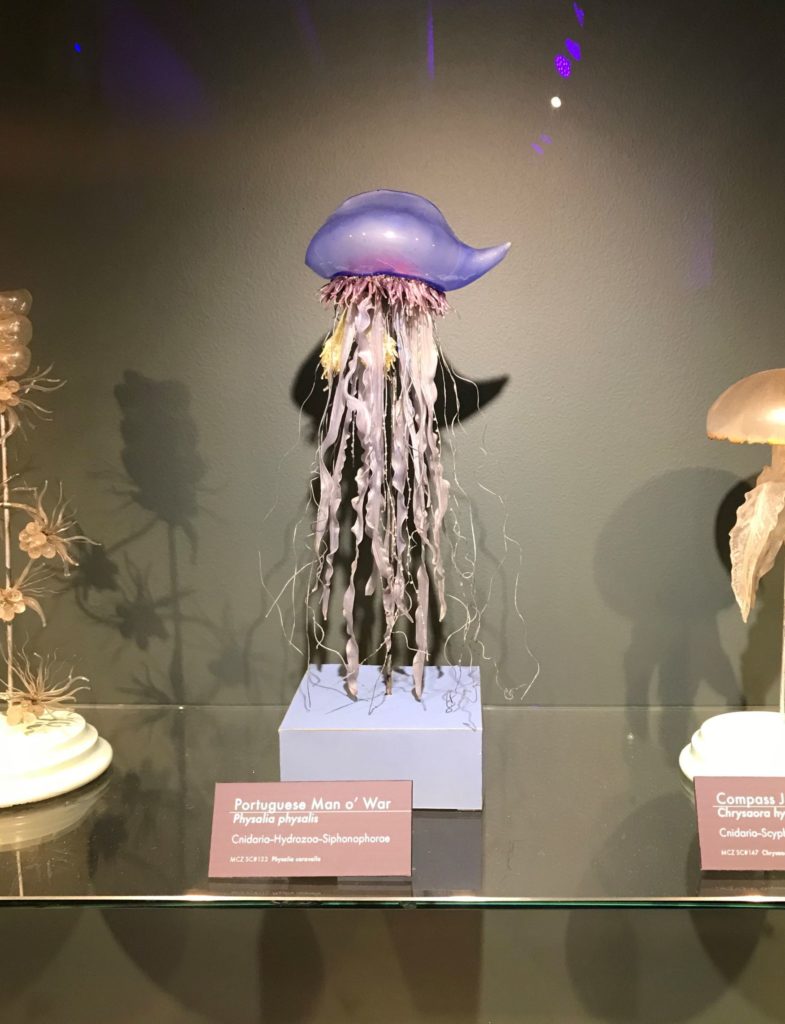 Science is so much more interesting when it is personal. He correctly identified the jellyfish based on a memory from over six years ago. Apparently even now, that same beach is being overrun with them.

2. You can say you went to Harvard.

Unlike many other museums in Boston, there was no café or food court. But Harvard Square was a short walk away. There was a small cafeteria in the science building about a block away, but my student passed. (Their menu was limited to organic soups and salads and probably didn’t include chicken nuggets.) He also passed on the food trucks parked outside. I was game to try whatever was in a Vietnamese bowl, but he was not. I promised him there would be more choices in Harvard Square and we continued on, cutting through the Harvard University campus. For an Ivy League university, there was a distinct lack of ivy. 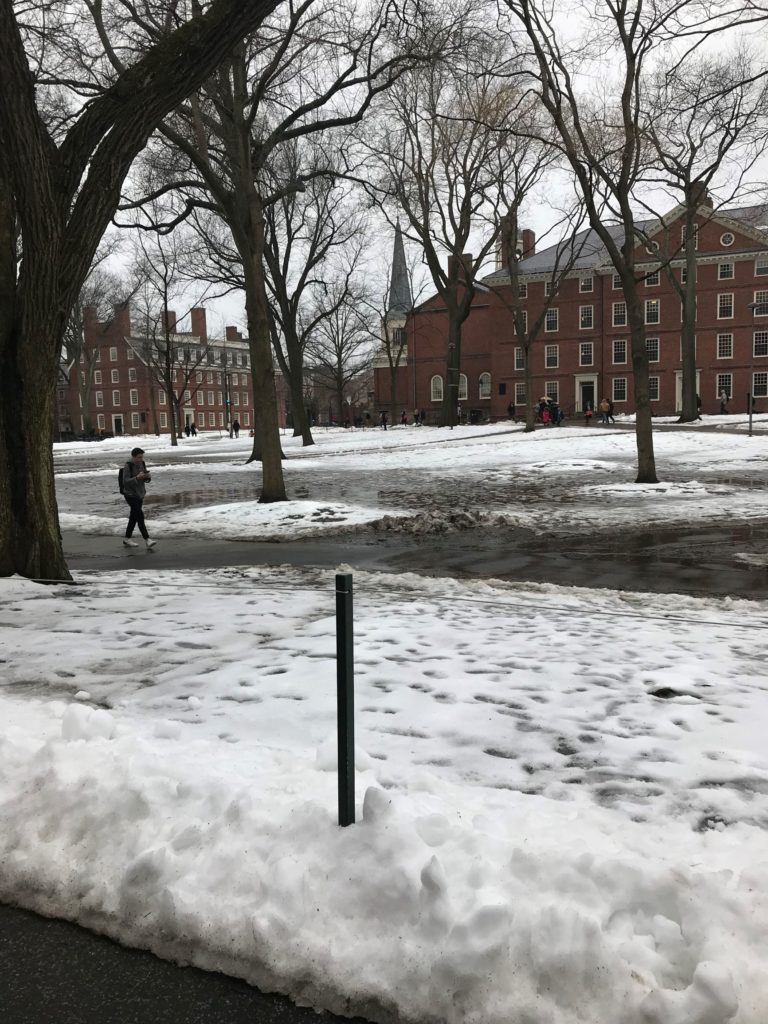 I told him all I knew about John Harvard: how he generously donated both his name and his entire collection of books to start the college. 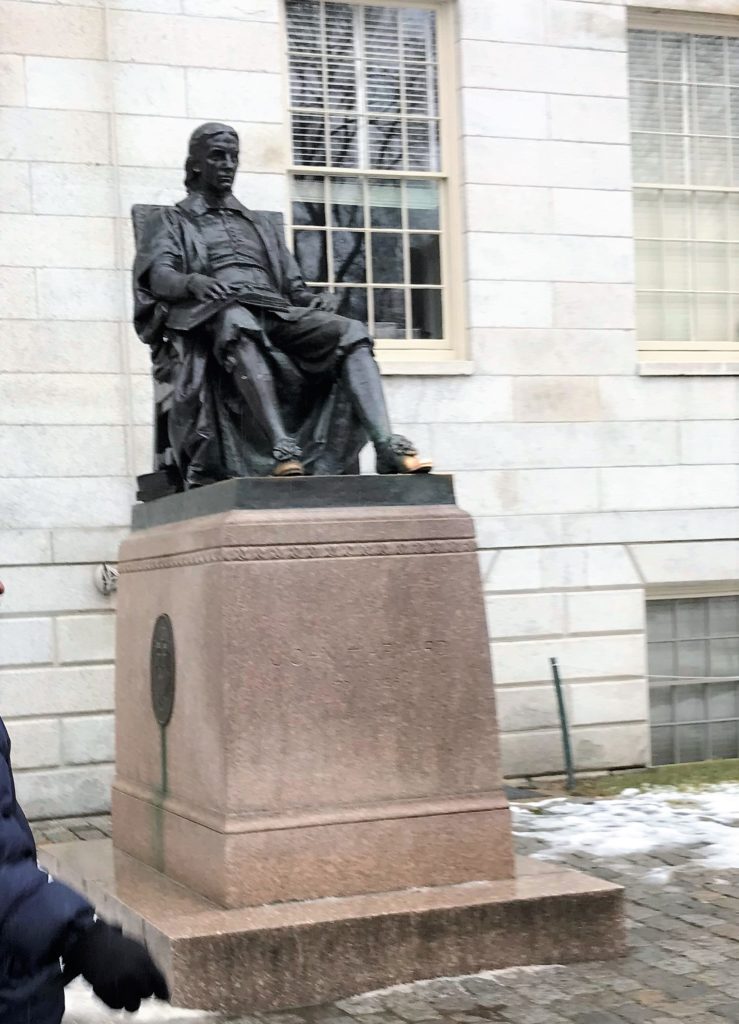 When we were about to walk past a dorm on the edge of campus, I stopped and told him how Facebook began. Facebook was based on an annual book created by Harvard University with each freshman's name and photo. The guy who put Facebook on the internet lived in one of these dorms. My student was shocked. “Really?”  To him, Facebook has always existed and hearing about its origins seemed like ancient history. Who remembers trying to navigate the internet before browsers?

Nevertheless, I was exceedingly grateful for modern smartphone technology which led us to a nearby fast food restaurant.

There, we had an interesting discussion about gutters.

As we ate, my student noticed a thing that collected water along the roofline of the building across the street and wondered what it was called. After I explained, he still looked confused. "Why do they say, 'Get out of the gutter?'"

“As in, 'Get your mind out of the gutter?'” I could see where this was going.

“Gutters used to be on the side of the streets, too. It's like in bowling when we say 'gutter ball,' but on a street, where waste might go. Especially in the days when there was no indoor plumbing.”

“So—don’t put your head in the garbage?” he reasoned.

How does one politely say to a tween, "Don’t think impure thoughts?" I calmly explained how the word “dirty” could also mean thoughts of a sexual nature.

For the second time that day, his eyes grew wide. “Oh! That makes sense!” While it’s always nice to enlighten my student, I was slightly alarmed to wonder in just what context he had heard the term.

You might say it bugged me. And that brings us to the reason number one:

1. All the bugs are safely dead.

If you have a tween who hates bugs as much as my tween does, they will be perfectly comfortable with the knowledge that all the creepy crawlies on display are dead. 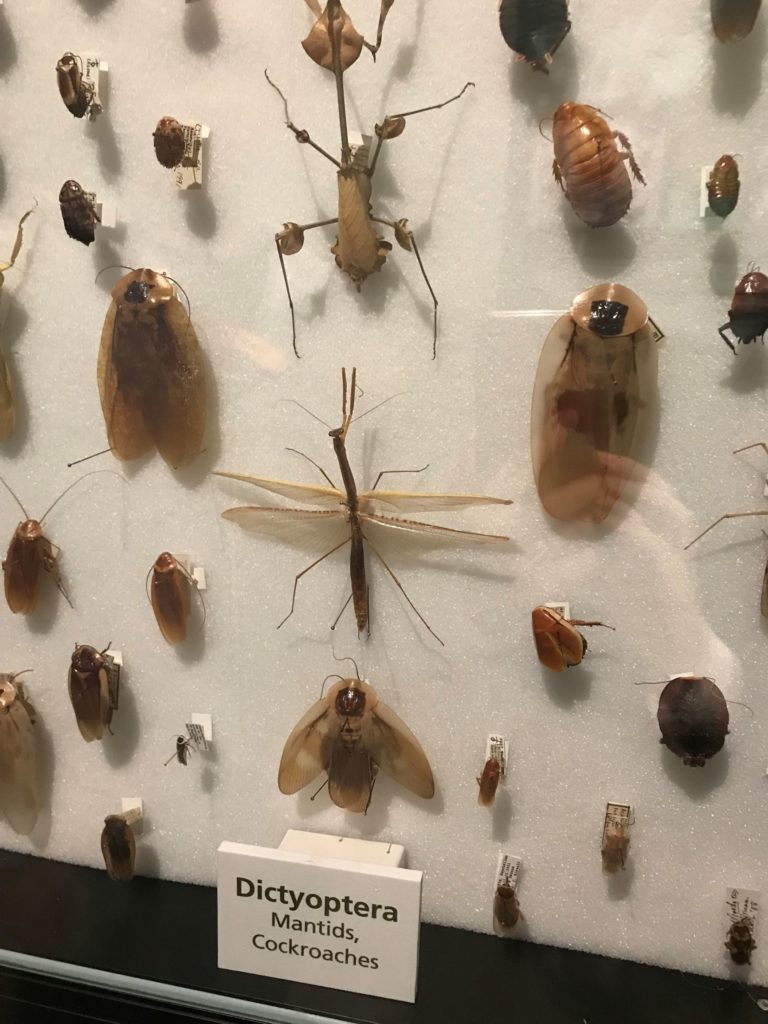 I hope this has whetted your appetite to explore these wonderful museums and to take advantage of its proximity to Harvard Square. If you have any questions or anything else to share, let me know in the comments below. As a big fan of all things science, I hope you "get bit by the bug." The metaphorical one, of course.